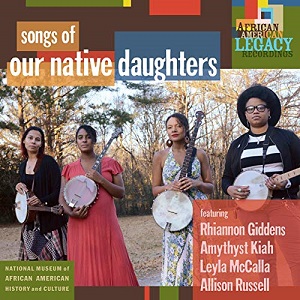 
This sparky collection shines new light on African-American women’s stories of struggle, resistance and hope. Its four protagonists draw their own creations from the interpretation of original sources dating back to the 17th, 18th and 19th centuries, including slave narratives and early minstrelsy. The whole project arose out of reflections and conversations between Rhiannon and Dirk Powell, and Amythyst, Leyla and Allison were quickly brought on board to realise their intentions. The result is a singularly inspired set of songs that confront, from a black female perspective, the ways we are culturally conditioned to avoid talking about America’s history of slavery, racism and misogyny. Basically, then, the album is a part of a larger movement to reclaim the black female history of America.

The central musical instrument for this project is the banjo – every one of the women involved is a player of either the five-string, tenor or minstrel varieties of banjo, and appropriately so since the banjo has been used to tell the story of America throughout, from the minstrel shows to country and bluegrass and the counter-culture folk revolution. And after all, the instrument originated in West Africa, so the salutary reminder is in the connection and onward progression of the music on this disc.

And what music! Supremely soulful, oozing total conviction and commitment to the cause, and tastily and sympathetically produced by Dirk Powell in a custom-built Louisiana studio with a really special ambience. Dirk and his chums Janie Dick and Jason Sypher provide a modicum of embellishment (accordion, fiddle, mandolin, bass, percussion) to the four central women’s The themes of empowerment and defiant expression run through the album from the get-go, kicking off with the chunky, swampy backbeat and feisty stance of Amythyst’s powerhouse anthem of interracial discrimination Black Myself. The album’s one non-original, the four women’s contemporary cover of the Bob Marley classic Slave Driver is seriously revelatory, while Amythyst’s extraordinary Blood And Bones, with its ominous tumbling funerary drum tattoo, passionately comments on the repercussions of institutionalised slavery on today’s society. Barbados presents a particularly intriguing time-portal in the form of a pair of recitations – an original anti-slavery poem by William Cowper and Dirk’s apposite modern-day response – bookending a haunting tune that’s said to be the first western notation of New World enslaved music.

Respect for heritage figures large too; Layla’s invigorating homage to Haitian troubadour Althiery Dorval is written in her ancestral language Kreyol, while Allison imagines a Ghanaian heritage for the tale of her enslaved ancestor Quasheba, Quasheba. I Knew I Could Fly honours the legacy of guitarist Etta Baker, a formative influence on Leyla, while Polly Ann’s Hammer explores the flipside of the John Henry legend through the woman who survived the work that killed John Henry himself.

On what to me is the album’s most heart-stopping moment, the stark handclap-and-percussion setting of Mama’s Cryin’ Long creates a children’s singing game out of a child’s observation of his mother being abused by the overseer – and the effect is abundantly spine-chilling; this pithy little ditty, once heard, resonates through the whole project. As in its own way also does Rhiannon’s song Better Git Yer Learnin’, set to a chirpy little tune from a mid-19th-century banjo method book, which addresses the issue of difficulties in education for the African-American slave.

Music And Joy truly and gleefully conveys the African sounds that formed the core of the American minstrel tradition; a similar kind of township-jive vibe inhabits the strange syncopations of Moon Meets The Sun, one of the disc’s most compelling earworms (and there are many, I assure you!). And the album’s final track, Allison’s song You’re Not Alone, is a touchingly reassuring expression of love and faith from mother to son. Not all is repression and struggle, then – but the spirit forges on and through, permeating every note of this disc. It’s a triumph, both musically and presentation-wise (the package contains an exemplary 32-page booklet with full lyrics and notes), and I’d say firmly in the necessarily thought-provoking essential listening category of contemporary roots records. Don’t you dare miss out.

I Knew I Could Fly