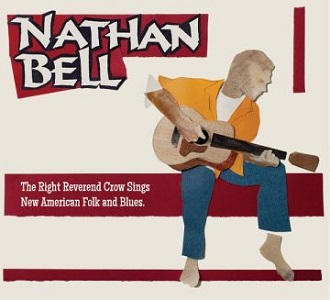 
There is a gritty-edged but nonetheless uplifting tone to the music of Tennessee-based Nathan Bell emanating from a convincing and seamless melding of gruff yet tender vocals and exemplary guitar playing.

Following on from his deservedly, much-vaunted Family Man set of albums - that included the superb I Don't Do This For Love I Do This For Love - he has emerged with this eight-track EP, recorded in California at the same time as a new album set for a 2020 release.

Brian Brinkerhoff (Malcolm Holcombe, Guitar Shorty) and Frank Swart (producer of The Pixies and bassist for Patty Griffin, John Hiatt, Buddy Miller) fulfilled productions duties at Need To Know Music. These are guys who have worked with Gretchen Peters, Jimmie Dale Gilmore, Justin Wells and Tommy Womack and this is the first Bell has elected to release music overseen externally.

This roll-up-your-sleeves offering involves a vibrant, 50-50 split of powerful blues and enticing folk songs but spotting the difference is tricky as Bell's singing clings to the pace and hues of both musical genres without, seemingly, any strain or difficulty.

Opener, Retread Cadillac (Lightnin'), references Lightnin' Hopkins with its muted stomp and a spikey, spoken word delivery that is unhurried and pinpoint sharp with Bell, all the while, picking his guitar gloriously.

Johnny Winter is a track that has Bell, almost preacher-like, relaying a highway journey while Mr Winter plays the blues: it is as straightforward as that, and hugely gripping at the same time. New Cocaine Blues sees the tempo upped but then it drops for a stately stroll through Rolling Blues, with Bell at ease and enjoying himself.

Poisonous Snake is brilliant - deft guitar provides the spirited undertow to the religious, low-key fervour being summoned and relayed: "Somebody's testifying / everybody shouting back / the whole room is spinning / and it's all going black, Hallelujah," Bell sings with unabashed relish.

Originally released on his compelling 2017, Love > Fear (48 Hours in Traitorland) album, The Big Old American Dream brings things to an articulate, warming and considered close. It's an archetypal Bell composition, both pointed and regretful but delivered with a knowing affection.

In a just world, Nathan Bell / The Right Revered should be gathering more followers to his musical flock on the strength of his riveting catalogue - since catching Bell live in February 2017 for the first time I count myself in. Here he continues to impress.