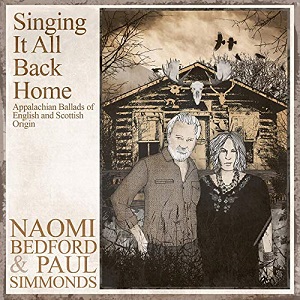 
Sometimes the journey matters. Linie, for example, the world's oldest aquavit makes a journey around the world, twice over the equator in barrels, to mature into an exceptional spirit.

Similarly the spirit of Appalachia is captured here by Naomi Bedford and Paul Simmonds as they collect traditional songs which have travelled from their British origins to the Appalachians and now back. In doing so they are refreshed and reinterpreted, keeping folk music alive, exciting and vibrant.

It's always a pleasure to listen to Naomi's wonderful and distinct voice, here it sounds as authentic as mountain moonshine, you could be forgiven for closing your eyes and feeling transported across the Atlantic.

Closing your eyes you try to remember other versions of the songs captured.

The opener "I Must and Will Be Married" is perhaps more widely known as "The Fit's Come On Me Now" or the Celtic "The Humours On Me Now", yet as you rack your brain to think who recorded it and when, it quickly dawns on you that it doesn't matter.

You realise that here in your hands you have versions that have a life of their own with verses and tunes that have adapted and changed through generations. You warm to the mandolin and banjo of Ben Walker, the country style fiddle of Ben Paley.

Paul Simmonds adds vocals and guitar. Indeed the track "The Fateful Blow" has more than a passing nod to an acoustic Men They Couldn't Hang interlude.

"Rebel Soldier" is pushed along with a rhythm section of Rhys Lovell on bass and Billy Abbot on drums. Other guests include Rory McLeod on harmonicas and Lisa Knapp on hammered dulcimer, all of which enhance the songs on offer.

Many of us of from the older generation will be familiar with Fairport Convention's version of "Matty Groves". it's stripped back to clear and pure vocal, supported by guitar and mandolin. The song has a distinctive American feel that works exceptionally well.

As does the "Sheffield Apprentice" a tale of love unrequited, of being faithful and paying the ultimate price, whilst an accapella version of the "Foggy Dew" extols the virtue of doing the right thing no matter what.

To conclude, "Singing It All Back Home", endorsed and assisted by the elder stateswoman of folk, Shirley Collins, is an absolute joy of an album which improves with every play.

I Must And Will Be Married