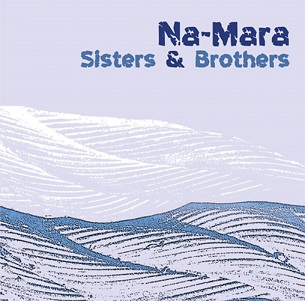 
One of life's certainties, thus far, is that any music produced by Na-Mara, be it live or recorded, will be of the highest quality and guaranteed to involve subjects and themes of compelling interest. Their latest recorded release, Sisters & Brothers, does nothing to contradict that assertion, indeed it would be fair to say that this offering reaffirms their status as one of the most talented duos around.

For those new to Na-Mara, they are Hertfordshire-based duo, formed in 2006, comprising Rob Garcia, (guitar, mandolin, octave mandolin & backing vocals), born in London of Spanish descent, his father being a child refugee from the 1937 Guernica bombing, and Paul McNamara, (vocals, guitars) born in Middlesborough, writer of all original lyrics on this album. They are also occasionally joined by Dan Garcia on bodhrán and percussion for the recording.

The album's title comes from the first song. 'Sisters & Brothers' describes the world's worst structural failure accident in modern history, the 2013 Savar building collapse in Bangladesh, which resulted in over 1 000 deaths. British folk music has a proud reputation in providing witness to injustice, exploitation and disaster, and here we are urged not to forget that as our economy goes global, so does abuse and tragedy,

Equally moving is 'The Siren's Call', a poignant song detailing the damage done by modern-day gambling addiction. The folk tradition has many lurid tales of murder for profit, and 'The Black Widows' is a more than worthy contemporary addition to the canon. The true story of sisters Catherine Flannagan and Margaret Higgins, hanged for murder in Kirkdale Prison, Liverpool, for murder, who having taken out multiple life-insurance policies on family members then poisoned them slowly with arsenic taken from fly paper, is chillingly recounted here. Gilmore & Roberts would be a good reference point in terms of the quality of the narrative writing such as this.

'The English Penny' moves us into familiar Na-Mara territory, the Spanish Civil War, indeed this song has also appeared on the duo's Songs of The Spanish Civil War E.P., albeit this is a new, and different, version. Inspired by the story of Penelope Phelps, (later Feiwel, and who wrote even later under the pen-name of Fyvel), a nurse who volunteered to go to Spain to serve in the hospitals of the Spanish Republic and with the International Brigades, and based Penny's own words, the song takes the form of an imagined conversation between Penny and a young nurse caring for her in old age. It contrasts the peace and tranquillity of later life with the privations, noise and terror of her experience in the Spanish war. With the very impressive, and thought-provoking, 'We Met Upon the Barricades', Na-Mara have mastered the art of producing a song with contemporary meaning and resonance yet, simultaneously, making it sound like a traditional lament. It is a wonderfully constructed song concerning government subterfuge and undercover embedding, but to further elucidate might be a 'spoiler'.

Two sets of tunes appear on the album, helping to provide variety and variation. The fourth cut on the album features Rob's own lively 'Canberra Bourrée sandwiched between their arrangements of a traditional Breton 'An Dro' and 'Muiñeira de Boal' from Galicia, whilst the pairing of 'Québécois Reel', Rob's arrangement of a short introductory instrumental from Le Vent du Nord and his own composition, 'The Locksmith's Reel' display the duo's high-quality musicianship.

Another core element of the album is the four traditional songs, whether their beautiful arrangement and rendition of the lilting Scottish 19th Century 'Time Wears Awa' ', or their translations from the French, be they of Canadian or French origins.

Their arrangement of the 'The Recompense', from the traditional Québécois, has taken the translation from the singing of Mélisande Gélinas-Fauteux, and, provides a rather different variation to its ending than that usually found in the 'broken-token' sub-genre (again, no 'spoiler' here -seek it out yourself- you won't be disappointed).

The traditional French children's song, 'Compagnons da la Marjolaine', does not seem out of place here, and the arrangement of 'If I Had But One True Love' , a traditional song of yearning translated from the playing of Wallonian folk trio, Havelange, to these ears, loses nothing from the lack of accordion and violin in the latter's recorded version.

With Paul's words set to the tune of a traditional Québécois song, Le Vieux Cheval, as performed by Le Vent du Nord, 'The Poor Refugee' is a powerful, emotive song with which to close the CD. Beginning with a funereal beat, entirely in keeping with the sentiments of the lyrics, unfortunately as relevant today as when it was first written some time ago, it is a song intended 'as a counterweight to the multiplicity of songs that glorify battles and their heroes'.

'Yet on they travel and into hell descend
To suffer human hardships, as for themselves they fend

Their wretched lives, on strangers now depend'

Sisters & Brothers is a strikingly impressive release, combining traditions from across the Celtic diaspora and superbly well-crafted song-writing. By any standards, Na-Mara are one of the outstanding duos on the contemporary music scene and this album is highly recommended.