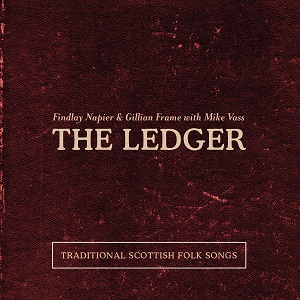 
Taking inspiration from a ledger kept by Findlay Napier's grandfather, Findlay Cumming, gathering a scrapbook of weekly publication by The Scotsman newspaper during the 1950s and early 1960s of a traditional Scottish folk song with lyrics and melody alongside an explanatory article by famed folklorist Norman Buchan, subsequently gathered together in 101 Scottish Folks Songs - The Wee Red Book and The Scottish Folksinger. Together with Frame and Vass, Napier whittled down the sixty plus songs from the ledger to the ten on this album, which comes with a booklet on which each double-page spread has a sepia facsimile reproduction of the original article, musical notation and lyrics for each of the ten songs. Featuring Napier on guitar, Frame on fiddle and Vass on tenor guitar, fiddle and music box, alongside Euan Burton and Steve Fivey providing bass and percussion, respectively, it's a mix of the familiar and lesser-known from the Scottish tradition, kicking off with a lilting reading of 'Bonnie George Campbell' (soldier goes to war, only horse returns) sung in the vernacular by a perfectly harmonising Napier and Frame as the fiddle waltzes in the instrumental breaks.

Taken at a jaunty Gaelic stomp, 'Burnie Bushel' is a street song credited to Ettrick shepherd poet James Hogg under the title of 'Birniebouzle' in The Forest Minstrel of 1810, and is followed by Napier and Frame duetting on the lullabying 'Baloo Baleery' (baloo, of course, being Scot for lullaby).

Two very familiar numbers are up next, the first being transportation ballad 'Van Diemen's Land', this version taken from Ewan MacColl's Scotland Sings anthology, Frame's voice upfront shadowed by the deeper sounding Napier, followed by his singing of the double deaths ballad 'Barbara Allen', here based on the version collected by Gavin Greig. Lightly fingerpicked, graced with strings and sung by Frame, 'As I Was Walkin' All Alane' was described in the newspaper as a new folksong in the tradition of the old ballads. Indeed, its murder ballad narrative is styled on 'The Twa Corbies' and based around a Breton pipe tune and was written by Ann Neilson, a Rutherglen 13-year-old who went on to become part of the Ian Davidson Folk Group in the 60s and subsequently Stramash before becoming a tutor of Scottish traditional song at the Royal Conservatoire of Scotland.

Adopting the flowing delivery recommended by Norman Buchan in the article, Frame also sings 'Jamie Raeburn', a song from the Industrial Revolution that serves as a companion piece to 'Van Diemen's Land' telling as it does of the titular baker transported, some claimed unjustly, for petty theft. Another familiar tune, opening on bass and guitar, the forlorn 'Twa Recruitin' Sergeants' has Napier complemented by Frame's fiddle as he tells of naïve young men seduced into taking the king's shilling with promises of a better life than farming penury, Fivey introducing a subtle backdrop of military drums midway.

It ends upbeat musical and lyrical notes, firstly with Frame singing lead and Napier harmonising on the indeed 'cheery' 'Mormond Braes' telling of an Aberdeenshire who's not going to let a little thing like being jilted get her down and stop her looking for love again and, finally, the evergreen 'The Road To Dundee' (or, more commonly, 'The Road and the Miles to Dundee') in which, one windy night, since directions are too difficult to give, a man offers to accompany a young woman to Dundee, the pair exchanging tokens of remembrance on arrival but parting never to meet again.

It's a fine collection and addition to the catalogue of Scottish folk song recordings and, if it proves as successful as it deserves, perhaps another visit to the cuttings might well be in order.