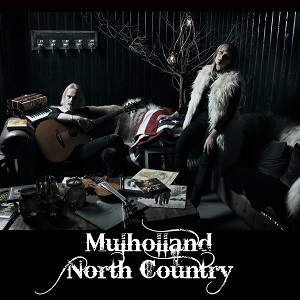 
Mulholland's original incarnation in 2012 was that of a five piece Americana covers band. However, the band slimmed down to husband and wife duo Stan Smith and Ann Dunford in July 2015, with Stan covering lead vocals, acoustic guitar and harmonica, while Ann plays fiddle, accordion and keyboards as well as adding harmony and backing vocals.

Everything about this duo spells out their love of all things Americana, their influences, sound, name, dress, publicity, styling and aspirations. Apparently, the name itself was inspired by the cult David Lynch film 'Mulholland Drive' and a line from Tom Petty's seminal song 'Free Fallin'. The fact that Mulholland Drive, a street in the Santa Monica Mountains of Southern California, attracts such artistic interest says much about what it represents in modern American mythology and symbolism.

Musical influences for the duo are set in what they call the sounds of 'Americas heartlands' and include Bob Dylan, The Byrds, James Taylor, Tom Petty, 70's Singer/Songwriters and more contemporary artists like Ryan Adams and Jason Isbell.

Now, some might say that all the above could be something of a problem for Stan and Ann as they hail from the city of York in North East England, but more of that later!

Their eight track CD 'North Country' is beautifully packaged and clearly, a lot of thought has gone into the overall presentation. This also extends to the duo's presence on Facebook, Twitter and their website, all of which are very current, interactive and informative

Of the eight tracks, six are Mulholland originals, one is a co write featuring lyrics by Amrai Smith and there is one cover, the Warren Zevon song 'Don't Let Us Get Sick' from his album 'Life'll Kill Ya'.

For this album, additional musicians were drafted in adding dobro, percussion, electric guitar, double bass, mandolin and banjo to supplement the duo sound.

First track 'Cold Wind' kicks off with that archetypal Country first position chord and bass run strum, the dobro then slides in followed by Stan's first line "Cold wind's blowing through the town tonight", which pretty much sets out the stall for all that follows.

Stan has a distinctive voice, shades of a young Bob Dylan when he still sang high and lonesome, but also Nottingham's Jake Bugg who shares that upper, slightly nasal register. In the context of Mulholland's Alt Country/Americana genre, this is probably a distinct advantage but, as with both Dylan and Bugg, in a wider sense their voices do polarise opinion and tend to be either loved or hated. Ann joins Stan on vocals for the chorus and has quite an effect on the overall sound, softening his sharper edges a little and their voices work well together. What is also clear on this first song and the others that follow is their ability to write a catchy, hooky chorus.

The next song 'My Wasted Heart' chugs along with both Stan and Ann on lead vocals and this really adds a pleasing sense of harmony.

'So Sorry Blues (Revisited)' is a brasher track detailing a troubled relationship in which the protagonist feels unable to leave his love and suggests the only solution is for them to kill one another "And we'll both lay down to rest"!

The fifth song 'Shifting Sands' rolls along nicely with an almost Cajun feel and yet another catchy chorus.

'Summertime' is the only co write and again has a slightly Cajun feel with some nice accordion by Ann pushing things through.

The seventh track, Warren Zevon's 'Don't Let Us Get Sick' follows. This deceptively simple song, essentially guitar and vocal originally, is obviously coloured by the tragedy of his early death and I don't think that sensitivity is captured by here. In all fairness, the personal nature of this song is hard to replicate by anyone and the tendency when covering it does seem to be to smooth it out a little.

Last track 'Highway 101' is my favourite on the album. It really gallops along on the driving percussion and cigarbox guitar riff conveying a lovely, shambolic 'Seasick Steve' type energy and vibe.

I think the strengths of this album might also be amongst its potential shortcomings.

From the opening bars of the first song it is very clear what the sound is going to be and this is not deviated from in any significant way over the ensuing eight tracks. Given the duos love and commitment to all things Americana, this was always going to be the case. This probably defines the band, largely defines whom they will appeal to and in what genre they will most easily sit.

However, in listening to this album I was concerned their sound was a little too derivative, too much of a homage to their influences and not enough of them in the mix. I think that necessary transition from a covers band to a song writing pairing that produces material with an individual voice is still a work in progress. Maybe it is that situation of a duo from York wanting to be a duo from Nashville. Nothing wrong with that of course, but I think to be more authentic the songs need to say something about that conflict in a way that then informs the music.

I don't hear that here and this leaves things sometimes sounding a little dated when modern Alt Country, Americana, Roots and mainstream Country Music are getting a right going over by artists like Chris Stapleton, Jason Isbell, Rhiannon Giddens, Parker Millsap and numerous others happy to push the boundaries between genres.

There is much to be positive about here as well though, they work hard, promote themselves very well, clearly love what they do and have a winning way with a chorus. I am genuinely interested to hear what musical choices and decisions they make as they settle into being a journeyed duo and look forward to their future releases.