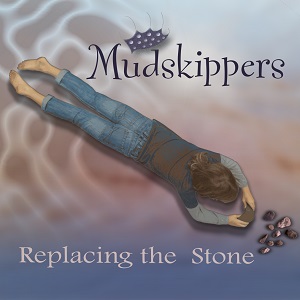 
Given that The Mudskippers were first formed in the early 90s, a debut album is somewhat overdue. Since then lead singer and guitarist (not to mention player of mandolin, piano, bass, percussion and didgeridoo) Adrian 'Bully' Bull has toured with Muse as their guitar tech, and it was only a chance meeting with fellow former Mudskipper Jo Hooper (cello) in 2010 that led to the band reforming. Picking up Corinne Bailey (Clarinet and Saxophone) to complete the new look line up, their collective path has led to Replacing The Stone.

Their influences are varied enough that it is impossible to pigeonhole their music. Folk, indie, pop, progressive rock, punk… pick a musical genre and the chances are that elements of it can be found in the album. Bully's voice is fantastic and completely unexpected; a strange mixture of Paul Heaton, Hugh Cornwell and Tim Minchin. With the cello and clarinet of Hooper and Bailey featuring so prominently, they have an unusual sound at times, but that just makes the album even better.

While the band describe the process of making Replacing The Stone as very long, the songs feel like they have been given time to breath and evolve. There is not a weak song on the album, and nothing that feels even remotely like filler. There is also an impressive variety on display. The opening track, Myself Denied, sounds a little like early 90s Beautiful South, though it's far from a retro throwback. Our Love Will See Us Through has a touch of Levellers in the music, and more than a little punk in the vocals. Twins could be a lost Nick Drake song, and Symptoms is a rollicking folk number.

This isn't to say that The Mudskippers are in any way derivative at all. The sound is very much their own, rather than clever mimicry of various other bands. Songs like The Truth About UFOs and Gangsters are simply beautiful, and make full use of the skills of all three members to the extent that you couldn't imagine these songs coming from any other source. The album ends with Mrs Martin which is another joyful collaboration between three musicians at the top of the game.

The Devon based trio are getting quite a following across the south west, and on this form it's very easy to see why. This is an enthralling debut album with so many layers you discover something new on every listen.

Our Love Will See Us Through