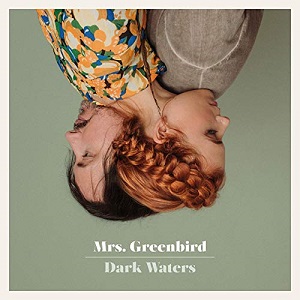 
When I saw Cologne based German X-Factor (2012) winners Mrs. Greenbird's website description of themselves as "folk-pop-birds" I was a little unsure what to expect. Was it going to be Europop? Would it be music to sway and wave Steins to? ….but wow!! I immediately played the title track "Dark Waters" to my producer, because it is a stunning piece of work. So get yourself a drink, alcoholic or otherwise, and lose yourself in this very fine album.

Mrs. Greenbird are Sarah Nücken and Steffen Brückner. The first thing that hit home was the beauty of Nücken's lead vocals which have a ring of both Jennie Abrahamsson and Gwen Stefani. "Dark Waters" is the duo's third album, this time on their own label, a succession of confident and superbly produced three and four minute songs.

The opening song "Long Time No See" is unashamedly pop, an extremely catchy, lyrically intelligent, three minute earworm, perhaps initially sucking in the listener into thinking that bright pop is what they are going to get throughout. "Morals" begins with an 80s synth beat and then grows into a rhythmically clever, if short, album track that teases the question "Is this who I wanna be?" before "Careless Heart" delivers an acoustic guitar driven love ballad, as if to make the statement there is much more to this album than three minute pop songs.

Then the title track. It deserves a review of its own. "Dark Waters" is an absolutely stunning song. It stopped me dead and I had to listen to it several times simply for the pleasure of listening. It is one of those songs that should become a band's anthem, with a minimalist first two minutes before bass root notes and floating synthesiser add that extra touch of quality that only the best songs seem to be able to deliver, with a simple drum beat and inventive electric guitar solo then taking it to yet another level. "Dark Waters. Went in too deep". It's gorgeous in its sadness, the highlight in an album of highlights.

"One Day In June" starts with an alternative country feel, until the chorus kicks in with a beautifully complemented vocal duet. "Don't you want to fall back and celebrate the beauty of life" has a melancholy about it. Brückner fronts the lead vocal in "Midnight Rose", backed by more interesting acoustic rhythms in another highlight track with a powerful chorus. "The Simple Things" takes the pace down a notch or two with Nücken's wonderful voice delivering sweetly dark lyrics with unhurried, heartfelt vulnerability: "I've tried to walk without my feet. And I've tried to dream but couldn't sleep…"

The acoustic "Like A Song In My Head" is followed by "1965", introduced by a driving handclap/tambourine rhythm. At first I felt this was pure single material, but unfortunately they don't allow expletives in singles. "I should have been a singer back in 1965. Living was so easy and the work was still alive" echoes sentiments that may musicians would identify with. I was 7 years old in 1965, and for a number of reasons I also harken back to those innocent days: "I wanna live in 1965".

"Tides Are Turning" is a little Abba-esque, maybe also with hints of Cyndi Lauper. Drawing these comparisons is not meant to indicate 'derivative', but more to indicate the true quality of these songs, after which it is up to other listeners to pigeon hole them wherever they like. The album finishes with Brückner again taking the lead vocals in the thoughtful "Learn How To Love You".

This album was an unexpected pleasure. It remains a true delight after multiple listens, very high quality in all its aspects: songwriting, musicianship, production, and two of the best matched male and female voices you will ever hear. Mrs. Greenbird are yet another reason why we need to maintain freedom of movement for musicians across Europe. Come to the UK and play soon guys!