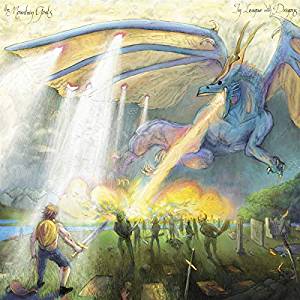 
I'm a bit of a hippy at heart, and "In League With Dragons" promotional blurb tells the story the writing of this accomplished album that "began life as a rock opera about a besieged seaside community called Riversend ruled by a benevolent wizard". Well that just intrigued, and prepared me to expect everything and anything. What follows is indeed interesting, and I think I agree with John Darnielle's hope that a new genre of "dragon noir" should evolve from this work.

Put aside any Game of Thrones dragon imagery that may have been conjured up though because this is a much more thoughtful and intelligent offering, and would probably have earned cult status in the heyday of progressive rock. Songwriter and guitarist Darnielle has a voice that meters a little like Al Stewart, and like Stewart his is not a technically perfect voice but it does suit the progressive themes of the music, and it is a storytelling voice.

This is (I think) the 17th or 18th "Mountain Goats" album for which the other musicians are Jon Wurster (drums), Peter Hughes (bass guitar), and Matt Douglas (described as a multi-instrumentalist) with the addition of Robert Bailey on additional vocals and the Macedonian Radio Symphonic Orchestra providing the string section. "In League With Dragons" is engineered by Matt Ross-Spang (Margo Price, Jason Isbell, John Prine) and produced by Owen Pallett.

There is some terrific musicianship throughout the album which announces itself with a steady beat and gentle piano chords to introduce "Done Bleeding', by no means a crescendo start but one that draws you in and holds that sense of intrigue. My interpretation of this album's lyrical content is that on the one hand it helps to explode the myth that wizards, figures of authority, sporting and music icons are any less human beings than the rest of us, and on the other permits us to fantasise that they are a dimension above.

Other than Al Stewart, comparisons with other musicians are difficult to make, and that is a compliment to this unique piece of work, but the acoustic guitar rhythm in "Younger" does remind me of early Moody Blues, possibly because of the way it blends with the backing vocals. This is a song with 'single' quality. "Passaic 1975" at first feels more conventional by comparison, but just like "Done Bleeding" it's a song that draws you in, this being an account of some the life on the road moments in the extraordinary life of Ozzy Osbourne.

The mood changes a little for "Clemency for the Wizard King" where dual vocals are employed to support the fingerpicking style of this song. "Possum by Night" carries the immortal line "grow fat and grow old, go blind and be content" and reflects again on the mundane struggles of people in the public eye. The title track "In League With Dragons" follows with an irrepressible, soft rock beat, beautifully crafted lap steel guitar in a supporting role, and provides a lyrical summation of someone of a public figure struggling with themselves, their demons, and where they find themselves in life.

The pace holds up with "Doc Gooden" continuing the theme of high profile people battling with their failing or faltering careers, in this case the fall from prominence of a major league baseball star. For me, "Going Invisible 2" is the album's stand out track. With cathedral organ style backing this is the album's one true earworm, a short, vocally impassioned song that is nicely interrupting the drive of the album and giving pause for breath.

'Waylon Jennings Live!" is an outlaw country song about a country outlaw which on first listening feels like a bit of a leap from the "benevolent wizard" theme, but it's another song that really grows on you, made by some of its dusty outlaw bar lyrics: "looking up at the one man in this room who has had more cocaine than me". The beginning of the curiously titled "Cadaver Sniffing Dog" continues the country rock theme but then transforms into more of a catchy pop song, with chugging percussion and a fabulous lead guitar break being the highlight of this track.

"An Antidote for Strychnine" is six minutes of mood music that perfectly suits Darnielle's vocal style. I was really struck by this track. Some might call it easy listening but there is much more to this song than initially meets the ears. It builds carefully and has more progressive echoes than many of the other songs. On first listen I was expecting a guitar solo in the build but instead it delivers some incredibly well-blended sounds with guitar and keys bouncing off each other without need for any kind of solo. "Sicilian Crest" starts like a Joe Walsh song of old. At first I felt I would not have finished an album with it. The previous track felt like more of a closer, but in the final analysis the works because it provides an uplifting ending to a really interesting listen.

Released on 26th April, this is an album that doesn't conform to any particular genre (other than "dragon noir"!), and that's something that has appeal for me. I like music that challenges and delivers something, and "In League With Dragons" definitely achieves that. You can make of the album and interpret its lyrics however you like, but few will be able to disagree with Darnielle himself that his songs take you "from shades of the 80s Athens scene to outlaw country and a few motoric meditations".

In League With Dragons