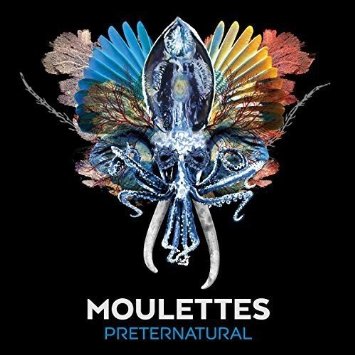 
If you've spent any time milling around the fringes of festivals large and small over the last few years the chances are pretty good you'll have come across Moulettes at some stage - purveyors of genus-trashing feisty, flighty, proggy, folky, rocky, erm, stuff.

For listeners of a certain vintage finding a way into this miasma of tags, descriptions and genres involves negotiating a few long-held prejudices, mostly derived from punk's Year Zero dismissal of all aspects (both positive and negative) of what had previously been termed 'progressive'. (Just to be clear, younger readers, it had to be done. No, really, it did. Shame it all got a bit messed up though!)

Anyway, preconceptions duly surmounted what we find on Moulettes' fourth album is perhaps the most cohesive assimilation of their influences and ambitions yet. At once of this world and another, their extravagant musical interludes are broken by lyrical passages that invoke feelings rather than tell simple tales. That's not to say the narrative has been neglected, because it hasn't, but don't be fooled by the apparently whimsical mood, there are big messages here, not least an appeal for the preservation of coral reefs (Coral) that's framed as a paean to a lost love.

Elsewhere you'll find lyrics about spiders that pluck tunes on their webs (Silk), an ode to amorous marine life (Pufferfish Love) and something about submarine art (Underwater Painter), but the album's real treat is in its courageous, gloves-off blend of rhythms, strings, electronics and other, erm, stuff that redefines the term 'progressive' for a new era and sculpts a new sonic landscape.

They mean it, maaan!