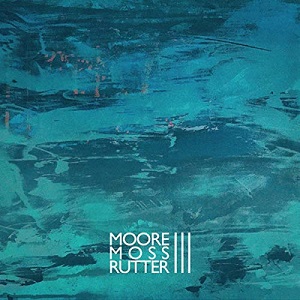 
Moore Moss Rutter is the plainly-named trio comprising three of England’s most respected and in-demand folk musicians: violinist Tom Moore, melodeon player Archie Churchill-Moss and guitarist Jack Rutter. They first played music together in 2009, and won the BBC Radio 2 Young Folk Award in 2011, shortly after which they released an impressive eponymous debut CD to kickstart a four-year spell of touring and consolidating their repertoire, at length producing the followup CD (the imaginatively named Moore Moss Rutter II) in 2015. Ever since the start of their musical partnership, theirs has been an equal-handed exploration of tunes (and the occasional song) from the traditions of their respective home counties (Norfolk, Somerset and Yorkshire), invariably presented with a maturity and sophistication beyond their years.

This at least partly explains why each member of the trio has seemed to be permanently in demand over the past few years, and such touring and recording commitments have meant that this third MMR album (the final phase of the trilogy) has been so long in coming and more difficult to arrange. But in summer 2017 the three musicians managed to escape to the Welsh countryside with top Sheffield-based producer Andy Bell and recorded the complete album live and in complete takes in a single room. This would of course have been impossible were there not such a remarkable degree of chemistry and intuitive synchronicity between them.

Aside from three tracks (a minuet by Purcell which is ingeniously coupled with a French and a Tunisian tune; and the brooding Danish wedding tune Brudestykke which leads straight into a compulsively propelled account of the Playford dance tune St. Martin’s Lane), all of the album’s selections are compositions by the trio members, with a fairly clear majority by Archie, four by Tom and one by Jack. They derive much of their direct inspiration, and a degree of atmospheric sensibility, from specific places or activities, often with a pronounced folk-dance influence and always with a wholly natural momentum. There are no songs this time round, unfortunately, but there’s still plenty of welcome variety within the tunes, with matters of scoring and dynamics brilliantly managed and tricky transitions expertly negotiated. The intimate yet spaciously detailed recording well conveys the players’ lightness of touch, while it both sympathetically balances textures and entries and gently enhances perspectives. The exceptional music-making on this album effortlessly confounds prejudices, and gives the lie to anyone who might otherwise balk at an all-instrumental disc featuring only three players.