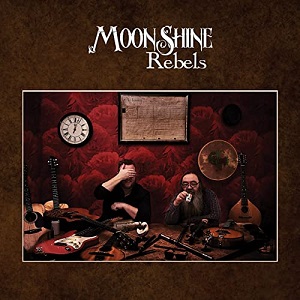 
Originally from the Manchunian band "Run Out the Guns" (we are fond of their rendition of "Chicken on a Raft"), the Moonshine Rebels contains the talents of multi-instrumentalists Paul Sudlow & Sam McGrady (and others) that combine to create a smooth, well rehearsed and played folk rock with a celtic influence here and there. This album is a pick n mix in that it doesn't stick to one style, there is something for everyone here be they die-hard folkies or those who were into bands like The Police and similar through the 80s. Though the album's songs lean more towards the folk end of things, it takes the electric route and keeps the energy flowing which appeals all-round.

"The Farewell" is a thumping, whistle led instrumental that reverberates in memory. The gentle, light touch of the woodwind clashes with electric guitar bringing a spiky edge to the unwinding track. Within the tune, it somehow communicates both the heart's pangs of saying goodbye and the more coarse bitterness of when it is an unwanted parting through a great celtic rock interplay of instruments. It is a rolling hillside and has the touch of the epic to it. "Varley Street" is more urban and chilled with it's slight percussion and streetwise guitar that has a hint of 80's blues/pop to it. The lyrics talk of desolation and a street in gloom with little social interaction and isolated flats, surely a reference to its namesake in Manchester? Somewhat quiet with steady beats it is light and cool, and a great addition.

The Rebels also treat us with a rendition of "Trim Rigged Doxie" (some versions are known as "The Rambling Sailor") in which a sailor gets a more physical reminder of some time he spends in the company of a woman when he gets to shore. It is a fun and sharp song and the Moonshine Rebels here show they are more than confident in tackling older songs, particularly this one which is relatively well known in folk circles. There is a sustained and fun energy throughout the album which culminates in the great send off of "Master McGrath and Jennys Chickens", a tale of a bet, a greyhound and a rivalry between England and the Emerald Isle. These songs always entertain as they recount these small flickers of joy in the hustle. The vocals are inviting, the storytelling is warm and has enough grandiose to carry it all forward with glee culminating in a frantic dance-along that sets the feet on fire.

We love the clash on this album of interpretations of the stirring traditional, the sweat of the sea and the heady near-modern rock. There is a love and a joy here and it all holds together through the Rebels embrace of the different material (which you feel is generously toasted by their own influences). We get the sense that a live show with these guys would be a very good thing indeed as there is a well-furrowed skill evident through their performance on this disc.