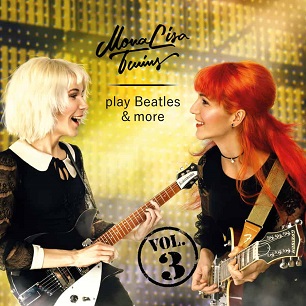 
Last week I received two CDs through the post from a band that I knew little about other than they had been recommended by a friend with similar music tastes to me. The Mona Lisa Twins' music instantly brought a smile to my face on about day 50 of lockdown. What a great medicine and antidote to this rather strange time in our lives.

Austrian born, Liverpool residents, Mona and Lisa Wagner have been making music together for many years now despite their youth. Born into a musical family and with a renowned surname, their musical future was almost ensured from birth. Eight albums and numerous concerts have enabled them to build up a big following especially amongst those fans of The Beatles and 60's music. Their experience also includes a 2-year residency at the world famous Cavern Club in addition to acting as support for numerous bands including Steve Harley & Cockney Rebel.

The bedrock for their music is a love of the sounds of the 60's, close harmonies and a plethora of Beatles songs, some of which I had forgotten about. The first of the two albums that I received is entitled "Play Beatles & More" and includes covers of some of the fabulous four's classics and others from Cream, The Kinks, The Zombies, Simon & Garfunkel, etc. Too many stars to list here and this album is the third in a series of cover albums. The other two albums in the series also concentrate primarily on Beatles' classics

The covers are all delivered with great vocals and instrumentation and are, in general, very true to the originals apart from the sex of the singers.

The second album I received is entitled "Orange" and it is pure coincidence that it is my favourite colour so I love the CD sleeve. Unlike the previous album, this one is made up of the twins' own compositions but still retains the feel and sound of The Beatles. Steve Harley described this album as "totally sublime" and I think that describes it pretty well. The final track "Still A Friend Of Mine" is my favourite on the album and for a change features the piano more than the usual guitar work. Both albums also feature John Sebastian from the Lovin Spoonful as a guest.

So, we have two albums that are different but with a common theme of harmony, precise guitar work and the feel, sound and inspiration of The Beatles running through it like the wording in a bit of Blackpool rock.

I have also discovered something else quite by accident. In these times of lockdown, I have taken to using my exercise bike again which I find really quite boring. However, the time just flies by when I join in with the twins' music especially on the covers album. There is a genuine sense of fun and joy about this music and as you may have already gathered, I am now a fan.

Still A Friend Of Mine