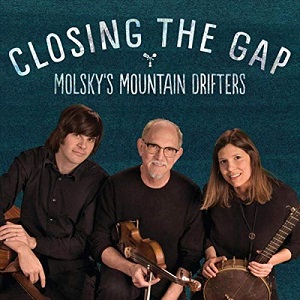 
Influential master roots musician Bruce Molsky can be described as indefatigable – not only a massive virtuoso on the fiddle, banjo and guitar but also a great singer, as well as a frequent collaborator with top-drawer musical figures on the country, folk and old-time scenes and on the Transatlantic Sessions shows. He’s also an inveterate, compulsive tune collector with a strong attention to detail, and a highly inspirational teacher. In 2016, not content with having already gotten a regular trio thing going with Aly Bain and Ale Möller, Bruce came together with two quite different younger musicians, clawhammer banjo ace Allison De Groot (formerly of The Goodbye Girls and Oh My Darling, now in a fabulous duo with Tatiana Hargreaves) and genre-bending guitarist Stash Wyslouch (formerly of the Deadly Gentlemen). They began digging into some music, found it gelled and did it over again. They clearly had a cathartic and newly galvanising effect on Bruce, showing him the way to finding “a new avenue of expression using old-time music as a jumping-off point: respecting, but not being constrained by, hard-core traditionalism”. It’s all embodied by the album’s byline-cum-slogan “tradition steeped in possibility”.

The wholly felicitous teaming of these three master musicians resulted in a stunning eponymous trio album, which was succeeded by an all-too-brief UK tour. Now here’s the sequel album, which gives a snapshot of the trio following a period of intense touring and learning each other’s instincts in order to develop collective instincts for the unit itself. (Not that the trio’s debut recording lacked anything in the way of instincts tho…)

Closing The Gap is titled after an original tune of Allison’s which to all extents and purposes is a kind of race, where the participants are constantly almost falling over themselves with each note they play to close the gap between the phrases and propel the tune along and forward – it’s tight, sure, but it never seems senselessly rushed, just full of that wonderful sense of abandon of three musicians havin’ a real good time and takin’ us all along with them. That track might well be symptomatic of the whole album, which is an overwhelmingly joyous exploration of those possibilities: captivating and vibrant, and as far from auto-pilot as you could imagine, stacked full of effortlessly intricate part-trading too. It’s raw, playful and free, the way music is meant to be for sure!

And it kicks off with the most hopeful of lead tracks, There’s A Bright Side Somewhere (a variant of There’ll Be More Joy from the Rev. Gary Davis). Every single track is just bursting with good-time feel, and it’s impossible to do justice in words to the tremendous, intricate musicianship that brings new ideas to the old music. Allison’s banjo chops take her from the driven to the generously understated, and sparkle especially when in direct partnership with Bruce’s fearsome fiddling. Stash’s riffs and fills can seem a touch strange, but they fit into the ensemble really well and considering his background in punk/metal he shows himself here to be a commanding yet sensitive exponent of the guitar. I could pick out a few of the tracks that really did it for me – Fortune, Hog Trough Reel, Grey Eagle, I Get My Whiskey From Rockingham, Shooting Creek, Greenback Dollar, and of the slower numbers a grand take on K.C. Moan and an engaging conversion of Kate Rusby’s composition Sweet Bride that gives it the tone of one of the old ballads. But in truth there’s never a dull moment, every track sparks, so you really do need to hear this music for yourself, it’s brilliant. And go see the trio if you can when they next return to the UK.