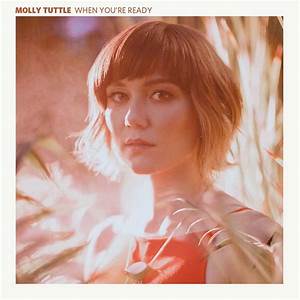 
Watching Molly Tuttle on stage in an intimate setting is just unforgettable as hands and fingers conjure up such magical sounds from her guitar. What you see and hear, and what you experience, fall into a life moment marked unbelievable.

Since the joyous day in Ireland in May last year when she enchanted me in such a way, I have gorged on her enthralling and quite brilliant, seven-track 2017 mini-release, Rise, and now she has released her debut full-length album, which is very different but that is because, as she admits, she responded - willingly - to being pushed to sing, play and write in ways she thought might be beyond her.

As a result, her individual virtuosity - she was the first woman ever to win the International Bluegrass Music Association's Guitarist of the Year in 2017 - has been muted to meet the demands of a band outing.

But, nevertheless, When You're Ready, has an unforced charm, gentle gems and an overall spirit of togetherness to create a bright showcase for her undoubted ability as an increasingly confident, singer and a songwriter albeit edging away from a basic bluegrass base for a sound - at least here - that may well win her a different audience and wider appeal.

The most immediately striking songs are the airy, Take The Journey, where her revered, claw-hammer style is surrounded with a barer backing and The High Road with a glinting piano caressing her excellent vocals while Sit Back And Watch It Roll, a tempered country rock number with punchy depth and rumbling drums, is a definite radio playlist contender. Make My Mind Up and title track, When You're Ready, are tightly produced compositions with, once again, Molly's vocals again grabbing the most attention rather than the musicianship.

Final track, Clue is simply downright gorgeous. The longest on the album, Molly sings it with the shining poise of Laura Cantrell, while her band deliciously bend, drift and wend their way through this captivating, forlorn tale. Her country/folk-toned, featherlight vocals sing: "Somebody told me your were singing the blues / And I tried not to care, babe / I am searching the airwaves for you" and all the while different guitar styles pitch in with an insistent organ for good measure.

It remains to be seen which music signpost she will follow next. Her first-in-the-know fans will doubtless advocate going back down the strictly bluegrass/roots route from whence she came, but this new-look, buffed up style of album could be repeated, depending on the reaction to it. She will let us know when she's good and ready.