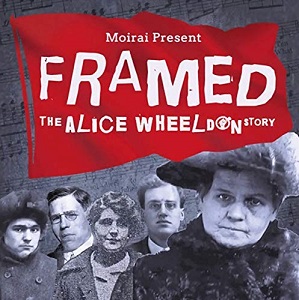 
I have to say that I first approached this album with slight trepidation - I'm not always very fond of "project" albums where I find the undoubted worthiness of the subject matter sometimes overpowers the musical enjoyment.

I needn't have worried! This is not only a project that tells a fascinating and very relevant story, it is also an album of fine songwriting and beautiful instrumental performances by the three women that make up Moirai: Jo Freya, Mel Biggs and Sarah Matthews.

As the story unfolds, it is told from different viewpoints of characters within the story, and also from the contemporary viewpoints of the musicians. It tells the story of the terrible injustice and conspiracy inflicted by the Establishment against Alice Wheeldon and her family during and after WW1. She was set up and framed for the attempted assassination of David Lloyd George, in order to silence her anti-war peace activism. Alice's steadfastness and bravery in standing up to a corrupt system is what inspired this album, and it infuses the music throughout.

The prologue, beautifully sung by Sarah Matthews, explains how she came across and was inspired by Alice's story. Sarah's lovely voice begins a cappella but is soon joined by instruments and other voices in a stirring, rhythmic piece that sets the tone perfectly.

Background to the story is laid out by the inventive arrangement of "I didn't raise my Boy to be a Soldier", in which three conflicting opinions about participation in military action are woven together into a fascinating harmonic structure that parallels the debates of the time.

"Bottom Up" is a catchy tune about the popular cycling social groups that became the bedrock of working class socialist and pacifist activism, especially for women who could not be full participants in the political world. We are then introduced to Alice herself in "My Door is Always Open". She is portrayed as a warm, generous woman deeply committed to her community and to helping those who need it. The following instrumental piece "Alice" builds from a gorgeous melody line into a complex inter-weaving of instruments that is composed to reflect Alice's complex character. "Proper Gander" continues the theme of women getting involved as activists in opposition to the then prevailing view of how women should behave.

In "DORA" we learn about how socialists and activists like Alice and her family were seen as a serious threat to the stability of the British state, against whom it was deemed necessary to take action. It tells how Alice was entrapped in the spurious assassination conspiracy. The story is continued in "Poison Plot" which has some of my favourite lines of lyrics for ages:

"Like a flea borne by rats,
she carries the plague
of words that are falling on ears.
Ears that so far like to reason and think
That she might have the truth, as they stand on the brink
Of supporting - or hating - this War."
- Brilliant writing by Jo Freya!

The next couple of songs set out the sequence of injustices inflicted on the Wheeldons spiral as they are imprisoned and scapegoated to deter others from protesting against the War. The appalling treatment in prison and emotional torture as they are kept isolated from other family members is movingly told in the setting to music of a defiant letter from Alice to a relative on the outside.

I don't want to give away the end of the story, but I think it very important to say how well this album works as a collection of songs and tunes that work together to draw the listener in. It feels like watching a powerful drama on BBC2. There is nothing obvious or cliched in the writing. The songs and tunes are lyrically inventive and musically complex, but throughout, there is a sense of strong melody and rhythm that makes many of these pieces really stick in the mind and resonate well after listening has finished.

The instrumentation is always understated, but always beautifully arranged and expertly performed is styles that blend Music Hall, traditional folk and contemporary forms with real skill. The vocals are consistently clear and strong. The whole album is a beautifully thoughtful and thought-out composition that deserves to be heard by as many people as possible, not least because so many of its themes and observations are as relevant to our social and political situation today as they were a century ago.

The Personal Is Political