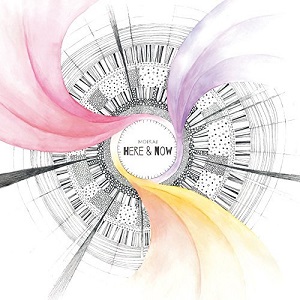 
Literally here and now, we're treated to the second album from the self-styled "spinners of destiny", individually Jo Freya (saxes, clarinets, whistles), Melanie Biggs (melodeon, flute) and Sarah Matthews (violin, viola, tenor guitar). Instrumentally, they cover most bases (save plucked strings), while each member of the trio is also a talented singer in her own right. In its able mix of material, this new set can be considered a true companion to Moirai's debut excursion Sideways, which appeared almost exactly two years ago, since the appearance of which the trio has been gigging extensively and honing their distinctive and full-bodied combined sound. The trio's spicy palette of varied instrumental colours has a definite European flavour at times (inevitable, I guess, considering Jo's Blowzabella history), and the whole remains admirably well-balanced, achieving its appealing impact without needing to resort to the ubiquity of bog-standard strummy guitars for its rhythmic impetus; Moirai's special instrumental blend remains lively and zestful, and the effect is both upbeat and uplifting.

This time round, the proportion of songs to tune-sets is slightly greater, and relies less on traditional sources than Sideways (although there's often still a strong traditional influence in the writing). Jo provides two of her own compositions; The Hare is a mystical-folk explanation of the Special Big Fast Rabbit's contribution to the seasonal calendar, while Rolanda's Grandmother is dedicated to Fatima Maria Ibler, whose family's story it tells while presenting a powerful condemnation of the treatment of victims of war. Sarah's song The Bellamont Sisters recounts a traditional tale concerning the origin of South Derbyshire's Swarkestone Causeway Bridge, and incorporates a minor-key variant of the morris tune Princess Royal (the ladies display their speciality of interleaving tunes within songs to good effect on several tracks here). Sarah and Jo both had a hand in the disc's catchy opening song Dust If You Must, although the basic lyrics of its fun tongue-in-cheek homilies have their origin (we're told) in an anonymous Facebook posting. The sense of spirited fun extends to Moirai's deliciously quirky take on The Bedmaking, through the fabric of whose jaunty, cheekily syncopated rhythms the musicians ingeniously intertwine versions of The Cuckoo's Nest from Gloucestershire and Wales. The second traditional song is Doffin Mistress; this variant, learnt by Sarah from the singing of Corinne Male, gives the ladies an opportunity to show off their a cappella vocal skills. The album's title song is a fine cover of a beautiful Daz Barker composition voicing a simple but important philosophy.

I realise that I've concentrated thus far on the vocal tracks, but the disc's three instrumental medleys are no less enjoyable, attractively scored and played - Mel contributes two tunes, including the mildly riotous Brexit Biscuits (which by means of a neat passage of vocal diddling segues comfortably into a traditional 3/8 bourée). An embodiment of the sense of pure joy - and the spirit of the dance - that Moirai bring to their music-making. And I love Mel's intriguing and thoughtful artwork too, streaming through the package.