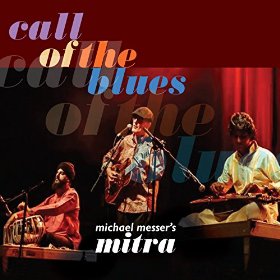 
The Blues can take many forms and cut across so many musical boundaries - from jazz to folk to rock 'n' roll - with many stops in between- but I think Michael Messer's Mitra is a first.

It sees one of Britain's top slide guitarists create a fusion of blues, Hindustani classical slide guitar and tabla rhythms.

'Mitra' means friends, the Hindu god of friendship and alliance and this quite an alliance.

Three musicians from opposite sides of the globe create a musical journey, running from the banks of the Mississippi to the Ganges Delta.

The track listing looks comfortably reassuring - with classic cuts from Muddy Waters and Fred McDowell but from the first track - McDowell's classic You've Got To Move - you know we are in different territory.

The familiar slide motif is still there but the Indian slide takes it to another dimension.

The subtle tabla adding to the intoxicating mix.

JJ Cale's Anyway The Wind Blows features the added piano of Richard Causon. The extraordinary slide playing of Manish Pingle is the standout feature here - his fills are sublime.

Muddy Water's Rollin' and Tumblin' gets the Mitra treatment. It is interesting how much new life can be breathed into this classic song - with some brilliant playing from Manish. Wow!

But it is the traditional raga Bupali Blues where the trio really get cooking. Up til now it has been American music heading east, now we have Eastern music heading West.

A single string motif is played on both slide instruments and the tabla burbles underneath. But is the interplay between all three instruments that is so special with Gurdain's tabla taking a leading role. This is fusion world music at its best. Great stuff.

The haunting You Gonna Be Sorry slows things down with Manish starting things off, invoking images of the River Ganges rather than the Mississippi. The rest of the band join in for enjoyable conclusion.

Messer's Blue Letters keeps the tempo slow and moody. The traditional Rolling In My Sweet Baby's Arms gets thing moving along with Mansish playing on top of Messer's finger-picked accompaniment.

The formula is repeated for Muddy Waters with Manish again displaying amazing dexterity as the trio get cooking.

The boys clearly love playing together - no more than on Lucky Charms, the tabla of Gurdain, the Mohan Veena of Manish combining with Messer's plaintive blues.

The delicate and achingly wonderful Sweetheart Darling brings the album to an all too sudden close.

In fact that is my only real criticism - with only 10 tracks and a running time of 53 minutes - I was eager to hear more.

This is a surprisingly uplifting collection of songs by three talented musicians who have succeeded in taking the blues in another direction.