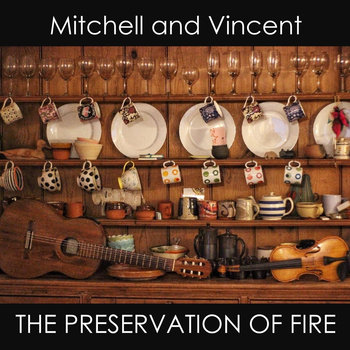 
David Mitchell and Graham Vincent are a duo based in Somerset who are rapidly gaining the reputation for delivering traditional and not-so-traditional music in a fresh and entertaining style. They don't mess around with the tunes but are never beholden to old fashioned styles and incorporate ideas and touches that keep everything sounding very much alive and of the time. The title of the album makes apt reference to this. It comes from a quote attributed to Gustav Mahler: "Tradition is not the worship of ashes, but the preservation of fire" .

2019 has seen Mitchell and Vincent playing at clubs, pubs and festivals from Penzance to Broadstairs including Glastonbury Festival and several London dates. This is their third album after "First Brew" (2015) and "Squaring the Circle" (2016)

The album opens with a couple of jigs:"Apples in Winter" and "O'Grady's" and immediately we are introduced to some of the key aspects of the Mitchell and Vincent sound. Graham Vincent and David Mitchell are both accomplished luthiers and hand-make all their instruments. The violin that Graham plays has a wonderfully honest quality to its tone - nothing of the ethereal orchestral violin, but a very direct and physical tone that is perfect for this style of playing. David's crisp guitar playing does much more than just support the violin - his arrangements dance along sometimes with and sometimes in contrast to the melody.

A lovely atmospheric rendering of "Molly Oxford" has the feel almost of a stately medieval pavane. This leads neatly into the first vocal track on the album, the widely recorded "Hard Times of Old England" - perhaps as relevant today as it's ever been. Graham's singing is pleasingly unfussy and unaffected, letting the song itself do the work. I feel perhaps there are a few moments where his voice gets a little lost in the instrumentation but it's a great singalong song for the drive home from work!

Two lovely tunes follow: a reel - " The Road to Glountane" and " The Last House in Ballymakea" which I think is a hornpipe.. it's a real foot-tapper anyway!

There are three more vocal tracks on the album including the only one composed by the duo. "Oh Albion!" is a catchy up-tempo song that disguises some gentle commentary on the state of current affairs in UK today:

"Oh Albion! What have you done?
Bought a cheap ticket to set yourself free.
Off to the seaside to re-live your youth
And now you must jump in the sea!"

The album ends with an epic twelve and a half minute set of five traditional tunes that contrast very satisfyingly with each other.

This is a very entertaining, varied and skilfully played collection of tunes and songs that stands up extremely well as a piece of studio work, but also serves to provide an excellent showcase of what to expect in Mitchell and Vincent's live performances.

As I Roved Out