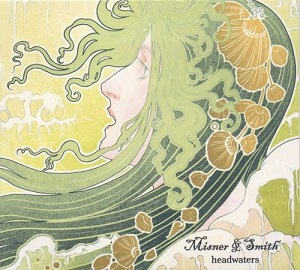 Misner & Smith
Album: Headwaters
Label: Self Released
Tracks: 8
Website: http://www.misnersmith.com
.For their fifth album together, actors turned folk rock musicians Sam Misner and Megan Smith have revisited their influences for a creative recharge, a stripped down collection of covers by bands and songwriter that have inspired their own work. Starting with a totally faithful renditions of Paul Simon's 'America' from Bookends, the duo sharing the verses, and Gram Parsons classic 'Return of the Grievous Angel' (co-penned, as is invariably never mentioned, by Boston poet Tom Brown who wrote the original lyrics with Parsons in mind), they rarely depart from the source, remaining in pretty much the same musical milieu for Neil Young's Buffalo Springfield classic, 'Expecting To Fly'.

With the addition of The Lovin' Spoonful's 'Coconut Grove' and The Band's 'It Makes No Difference', the late 60s and early 70s provide the bulk of the material, moving into the 80s for 'City of Dreams' from the Talking Heads' True Stories album. Of more recent vintage, Megan takes lead on Patty Griffin's 2002 song 'Making Pies', and, providing the album's obligatory obscure note, it ends with a selection from 2012, the bluesily fingerpicked 'Turning The Century' by Philadelphia rock outfit Dr. Dog.

The pair don't bring anything new to the songs other than their own voices, tending to make it all feel a bit like a party or campfire picnic where you get your mate with the guitar to sing some oldies you can all join in with, and it's rather hard to see who, other than the duo's loyal fans might buy it, or even be remotely interested. That said, it's an undeniably pleasant listening affair, even if it seems more likely to prompt you to go and listen to the original versions again, but if it serves to spark reenergise them and produce a new album of their own material, then the job's well done.