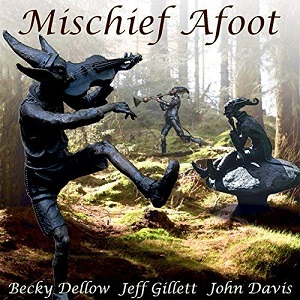 
Mischief Afoot is a folk trio based in the Cotswolds, comprising Becky Dellow (fiddle), John Davis (recorder, bodhrán) and Jeff Gillett (guitar, mandolin, mandola, dulcimer and English concertina and vocals). All are musicians of some experience, although Jeff's name is the most likely to be familiar from his recordings with Ron Taylor (also for WildGoose).

The menu for their debut CD consists mostly of traditional tunes and songs with origins in England, Ireland and American folk repertoire, topped up with original tunes by Paul Machlis, Brendan Ring, Gordon Duncan, Greg Morgan and Andy Cutting. There's a quality of easy-going, light-hearted and light-textured fun to the playing, maybe not exactly qualifying as mischief per se but certainly gently invigorating, and more than entertaining enough to bring a ready smile to the face on occasion. The musicians' individual and combined virtuosity can't be faulted, whether it's on the vivacious spin through Cats Of Camazen and Pressed For Time, the swinging account of Paddy Fahy's Reel or the delectable, more relaxed Bennachie Summer. Each combination of tunes is well judged and informatively annotated in the accompanying booklet. The disc's five songs are affably arranged and attractively sung, without necessarily adding a fresh interpretive dimension; of these, The Deserter and The Golden Willow Tree probably come off best, with some playful touches to the accompaniment.

All told, this is a most pleasing record, although in the cold light of comparison probably not quite distinctive enough to prompt regular replay of the whole album, varied though the menu is. But in the end that's not the criticism it may sound to be, and the purchaser is still unlikely to be disappointed by this unpretentious, well-intentioned and accomplished offering.