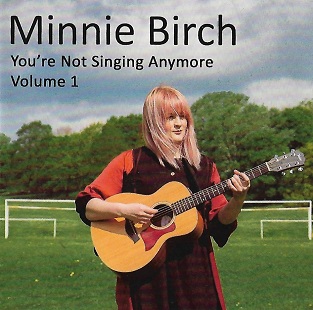 
YOU'RE NOT SINGING ANYMORE is a mini album or eight track extended mini ep from Herfordshire, singer, composer and musician Minnie Birch. Acoustic musician Minnie brings together two of her passions and interests, folk music and football, making a persuasive argument in song and in her intelligent booklet notes that folk club sing-arounds and football terrace chants and songs are linked. That football chants are one of the lasting traditions of our time, sung and passed on by ordinary people, unknowingly behaving like folk musicians. Across eight songs Minnie presents Football songs and songs based on terrace songs, whose origins are lost in time, surrounded in mystery and hard to pin to one person or place, like traditional folk songs.

As a sense of place, the album opens with a burst of "The Lord's My Shepherd", a field recording from West Bromwich Albion Terraces. First track proper is "My Bonnie Lies Over The Ocean", a beautiful folk version with Minnie's amazing voice well to the fore and guitar accompaniment by Minnie and Chris Cleverley. The sense of the distance and space of the terrace is suggested by some delightful harmonising late in the song. Minnie plays a fine version of Billy Bragg's "God's Footballer", a song obviously about the great game. Again the guitar, with Bass accompaniment by Lucas Drinkwater is wonderful, lots of space. The spiralling motif and vocal reminded me of Ruth Theodore, another acoustic troubadour with a great turn of phrase, distinctive guitar and fine voice. Fascinating is the use of spoken memories, cut alongside the music, the very natural voices and atmospherics are like footballing creature comforts. The voices present the human side to the song that Minnie is singing and it all works extremely well, running alongside and never overwhelming. "Blaydon Races" with a terrace choir recorded at Berkhamstead is strummed with the cadence of a limerick or dirty ditty. Starting on as a guitar and vocal piece it swells like a real terrace song, picked up the crowd with a wonderfully poignant slow ending. Minnie is also a pleasing piano player, accompanying herself with a minimal guitar like motif on "Accident Birth". The song by Steve O'Donoghue is beautifully delivered, the lyric moves from the micro to the macro with Minnie's measured vocal and sensitive accompaniment building an emotional atmosphere. The music and vocal spirals and winds, feeling like Footballs version of Vashti Bunyan's "Just Another Diamond Day". "John Brown's Body" is a sprawling bolt together of fragments of different versions of this song and as I can hear "Spirit In The Sky" popular culture. Minne's soulful intimate vocal is brilliant over the march gospel like tune with a real sense of reverie. "Cash Out" is a Birch song, a song of let downs and not measuring up. Football is there in the words (" I'm Not Listening") and the story, but the tender bruised song could sit on an Ani DiFranco or Ruth Theodore album. "Show Me The Way Go To Go Home" features more vivid real life vox pops memories. Commentators or colour samples like the voices on DARK SIDE OF THE MOON these are a powerful addition to the flow of the song against the pared back tender performance by Minnie that adds gravitas to the speakers.

Like social observation it's the small details that delight, the voices that accompany "God's Footballer" are local to Watford and Berkhamstead, as is Minnie, the terrace choir on "Blaydon Races" is recorded at Berkhamstead Football Club, where she played in a Saturday team in Bedmond. It is all driven by love, played out at real life scale. Folk Club intimacy informs the performances, illuminating local moments and small town romances on this charming set of songs. This is a carefully put together set, voice ( and what a wonderful voice) guitar that is strummed and stroked intimately with carefully chosen jewels of accompaniment. I am not a football nerd, I'm the opposite, my only connection is through song and the evocative use of the crowd on "Fearless" by Pink Floyd, but you have got to love the passion and attention to detail in someone else's obsession and that love speaks to me in a real way. The connection to Folk song and the Folk Tradition is very real and the examination of that most English game in a most English way at a local level is fascinating. The watercolour on the gatefold of the booklet by Minne's dad is a Lowryesque visual representation of how watching football gives light to many. Volume One says the cover, with a hint of more, yes please.