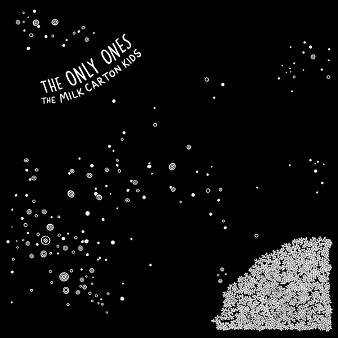 
After the full band sound of last year's Grammy nominated 'All The Things I Did and All The Things I Didn't Do', Kenneth Pattengale and Joey Ryan get back to basics as an acoustic close harmonies duo with this mini-album steeped in melancholic reflection.

They open with 'I Meant Every Word I Said', a song about being weary of a combative relationship that starts with the words "I don't want to fight anymore/Maybe you were right/I'm so tired"that sense of things in flux spilling over into the uptempo Texicali shaded fingerpicking of 'I'll Be Gone' where the narrator warns "I ain't one for leaving/But if you treat me wrong/I'll be gone/Gone before the sun goes down".

It's followed by the title track, echoing the lyric of 'Just Look Us Now' off the last album where "we knew in our hearts we weren't the only ones", but now, conjuring thoughts of Marty Robbins with its border cantina cascading chords melody, here they sing "let's fake it like we aren't the only ones".

They swerve thematic track with the politically-weighted dark-veined strum of 'My Name Is Ana', evoking the story of Anne Frank ("You might have read about me/I live in the attic with my family") in a timely contemporary setting of illegal (or even legal) immigrants faced with deportation as the young girls tells how "I sleep with my shoes on in case they come for me", the musical texture pointedly evoking Trump's 'repatriation' policies in regard to Mexicans.

The gentle 'As The Moon Starts To Rise' brings a more optimistic, positive perspective with its nostalgic reflections on love and nature, a place in the universe sensibility that also informs 'About The Size Of A Pixel', a gorgeous number that, while they're often likened to Simon & Garfunkel, both lyrically and melodically more specifically calls to mind the early albums of Paul Simon.

It ends with another reference to being like a pixel in the six minute plus 'I Was Alive', Pattengale's relaxed but passionate and emotionally textured guitar work underpinning a song celebrating surviving man and nature's seeming determination for destruction as they sing "I rode away in the sunrise/A great escape from a white lie/Thought death was a surprise/I looked around and I was alive".

Whether this is a breathing space before returning to the fuller sound on the next album or an indication of an ongoing return to their core, either way it's another terrific addition to their luminous catalogue.