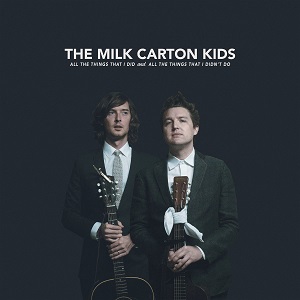 The Milk Carton Kids
Album: All The Things That I Did And All The Things That I Didn’t Do
Label: Anti-
Tracks: 12
Website: http://www.themilkcartonkids.com
.Over the course of three albums, Kenneth Pattengale and Joey Ryan have been gradually establishing themselves as Americana’s answer to Simon and Garfunkel, this, their fourth, is, perhaps, their finest expression to date.

Produced by Joe Henry and featuring a full band that includes bassists Paul Koert and Dennis Crouch, Jaye Bellarose on drums, Brittany Haas on violin and mandolin and Russ Pahl on pedal steel, it embraces themes of change informed by the American political scene but also more personal experiences such as the end of Pattengale’s seven-year relationship (hauntingly captured in the lines to ‘Blindness’, “this is where I live, in the spaces in between the harsh light of the morning and the magic of the dream, in one of them I’m dying, in one I never do”) and cancer surgery. It opens with ‘Just Look At Us Now’, a cello-coloured downbeat reflection on more innocent, idealistic days and wondering how things have gone so wrong, a theme echoed on the dreamily wistful Trump-influenced ‘Mourning In America’ (“woke up to a funeral song...everything I knew was gone”) with its strong Bookends echoes as it balances a personal tragedy with a political one.

On a similarly dreamy musical note, the languidly slow waltzing ‘Nothing Is Real‘, another number reminiscent of Paul Simon, is something of a departure as neither of the duo play guitars here, the song constructed around Pattengale’s piano part.

The tempo picks up for the skittering rhythms and S&G close harmonies of ‘Younger Years’ with its pedal steel and clarinet, the song another reflection on change, here veined with a sentiment conjuring Dylan’s ‘My Back Pages’, the melody a distant cousin of ‘The Boxer’, while, waltzing on weeping pedal steel and acoustic guitar and sung with a keening falsetto, ‘You Break My Heart’ conjures a much earlier era of 30s crooners.

The full extent of the album’s ambition comes with ‘One More For The Road’, a mournfully intoned 10-minute plus doomed relationship epic that’s essentially about a break-up fuck, the lyrical sparsity complemented by the extended jam of haunted fingerpicked acoustic gypsy guitar, organ, muted rumbling drums and effects.

If you’re looking to wallow in misery and desperation, then you should also be directed to the Everlyish ‘I’ve Been Loving You’, ‘Unwinnable War’ with its everyone’s a loser theme (“I’ve been wrong many times before, chosen sides in an unwinnable war, so badly I needed something to fight for”) or ‘Sea Of Roses’, a chorus-friendly pedal steel streaked number on which Pattengale contemplates mortality with trepidation (“I’m scared that when I die I’ll be alone with no one sitting by my side”) and goes on to plan his funeral (“put me back into the earth among all of my friends under a blanket of roses, a sea of flowers overhead”).

Unlikely as it may seem, there’s actually a note of hope there, one that, despite images of exile, also tentatively pokes its head above ground on ‘Big Time’ with its musically breezy chorus of going out on a high.

It ends (surely borrowing the closing notes from ‘A Wonderful World’) on the superb title track, a hushed and intimately sung, cello-enhanced Simonesque ballad that, enumerating the small moments that shape who are and who we become, reflects in heartbreakingly bittersweet manner on the arc of a relationship, telling “The story of how the end came to be. How you became you. How I became me. How we became lovers. How we became friends. Sisters and brothers. Beginning to end.” Listen in an unguarded moment and you might find yourself reaching for the tissues.

Their previous albums have all been well-received, but their low key folksy nature meant commercial success was somewhat limited, this time, by expanding the sonic landscape and bringing a more personal, emotional heft to bear, it is to be hoped that will also find the wider audience it surely deserves.

Just Look at Us Now