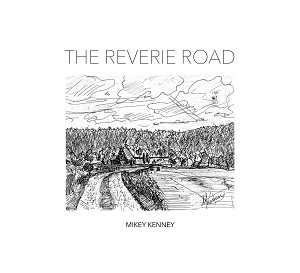 
Fiddle player and Balladeer Mikey Kenney will be no stranger to some, a collaborator and traveller, perhaps notable for Band of Burns and his work with Vinicio Capossela, but here Kenney takes you down his solo path, 'The Reverie Road'.

If you're expecting an album of fiddle tunes from Kenney, a man who drinks from the well of both the Irish and English traditions, think again. Original compositions such as 'Devil Goat of Keady' fit well into these traditions with superb fiddle playing and instrumentation but it's where Kenney takes you on a different direction where we are treated to further magic.

Kenney's Scouse roots are scattered across this album with titles of the songs such as 'Coleman's Fireproof Depository' and 'Up Hardman Street' but where Kenney takes you on his 'reverie road' are superbly crafted songs such as 'Montagna Di Menta' and 'Napoli'. Not content with singing in English, Kenney sings in Italian, a beautiful touch with is another confirmation that Kenney is definitely not a one trick pony, refusing to be pigeon-holed and often surprising the listener with unexpected song and chord structure.

Closing track 'Soggy Desert' for me has a reminiscent vibe of The Kinks, perhaps even at a push, a little bit of a psychedelic feel with its lyrics open to interpretation, packed to the rafters with imagery, leaving the listener reaching for 'repeat' several times. This for me is the album's finest piece and a perfect end to this beautifully crafted album. This could be one of the highlights of 2019.