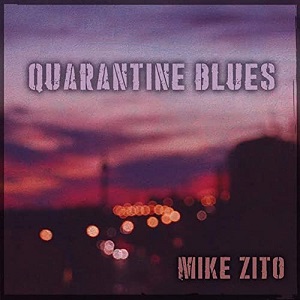 
The world is currently going through a real crisis of health and financial security. There is little doubt that when we come through this COVID crisis, the world will be a different place, but hopefully for the better!

For many, this is a time for a re-evaluation of lives and careers and one of the really big sufferers of this crisis is the participants in the world of music and the arts. It is quite possible that many may not survive and the loss of theatres and music venues will be a real tragedy for future generations.

Many musicians are now streaming live gigs from home via social media and this may well prove to be the normal method of promoting their music for the next period of time. Mike Zito has however done something slightly different. He has produced a FREE album for his fans using the GoFundMe platform.

The album was produced as a result of a European tour being cancelled and forcing Mike into quarantine on his return to the United States. The idea of a new album came to him on the flight back from Europe and he set about writing a few songs without any real idea about where it was all going to end. On his return to the States, he collaborated with Tracii Guns and Guy Hale on a couple of compositions, laid down his vocals and guitar work and then got the rest of his band to record their parts in their own homes, again due to quarantine. Mike mixed the album in his studio and the end result is "Quarantine Blues."

The opening track is entitled " Don't Let The World Get You Down" which rather sums up the general advice to most people at this moment in time. We will come through this!

The sounds of the rest of the album will be familiar to fans of Mike Zito of which I am one. A mix of gritty blues and rock all delivered with Mike's familiar guttural vocals and superb guitar playing. "After The Storm" arguably best personifies Mike's approach to music and will provide a good introduction for new listeners.

Bearing in mind the short length of time taken to write and produce this album, Mike has come up with a bit of a gem here. It will stand the test of time and will become a little piece of musical history at some point in the future when life has returned to some form of normality. The closing track "What It Used To Be" is a walk down memory lane through the eyes of the elderly and perfectly sums up how the world is changing.

Don't Let The World Get You Down