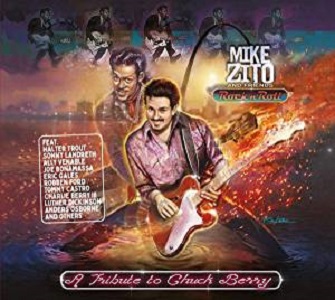 
Mike Zito is rightly recognised as a leading exponent of Rock and Blues music in the United States. It is therefore hardly surprising that he has devoted a whole new tribute album to one of the true greats of music, Chuck Berry. Mike has been playing Chuck's music since his childhood and his passion for it remains constant to this day.

Mike has been joined on the album by some of his "friends" including Joe Bonamassa and Chuck Berry's Grandson, also named Chuck. A number of other well known guitarists, twenty one in total, add their musical talent to this genuine toe tapper of a musical extravaganza. I have to admit that since I received the album, my feet appear to have taken on a life of their own in time to the music.

A substantial number of recordings made by Chuck Berry have been covered in the twenty tracks on offer here and all are played with the dynamism and drive of the originals. Mike's joy in this tribute can be clearly heard in his gritty and gutsy voice and the guitar backing in particular will be loved by any fan of Chuck Berry or of genuine early Rock & Roll music. Johnny B Goode is playing as I write this part of the review and it is as good a version as I have ever heard.

There is no point in listing the tracks on here, just visit the website and take a look. If you enjoyed Chuck's music, you will love this album and be taken back to a time of less confrontation and more innocence when music really did change the world.

If there is a life beyond this one, then I am sure that Chuck Berry will be thrilled with this latest tribute to his genius. He died in 2017 and his influence which extended from Elvis to The Beatles and beyond, continues to this day. I have no doubt that if he is perched on a cloud somewhere looking down, he will still be singing about his "Ding A Ling" and giving Mike Zito a very big thumbs up.