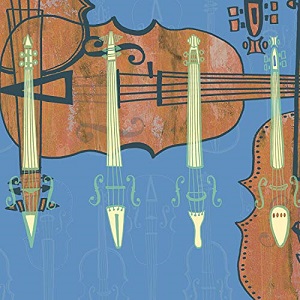 
Mike Vass has been regarded as one of the foremost creative forces on the Scottish music scene since he and his sister Ali first came to the attention of Edinburgh's Bechhofer Agency in 2008. He is a musician, composer, producer and arranger and in that sort time has amassed an enviable portfolio of innovative work.

In "The Four Pillars" Vass has produced a thing of exceptional beauty. I was going to leave it there and let you make up your own minds, because sometimes we should just let the music do the talking, but he and his wonderful team of musicians may have achieved the most beautiful opening to any album you will hear this year. Truly stunning.

An instrumental album, "The Four Pillars" was commissioned as a project for the 2018 Scots Fiddle Festival in Edinburgh, and comprises four fiddle moods: the Air, the March, the Strathspey, and the Reel. Vass put together a team of fiddle players (the others being Patsy Reid, Lauren MacColl and Jenna Reid) to deliver the project and so divided this work into those four essential ingredients. Backed by a string quartet (Feargus Hetehrington and Colin McKee on violin, Asher Zaccardelli on viola, Laura Sergeant on cello), the result is a suite of modern, classically fused folk music, and is an absolute triumph.

Lauren MacColl takes the lead for the Airs "After Years" and "The Ancient Day". We don't hear nearly enough of this kind of fiddle playing. It's calming, it's mournful, yet it's also uplifting. Music should ground us and take our minds to another place, away from the stresses, strains, and frenetic pace of life today.

Vass himself takes on the March section with "A Handful Of Dust" and "From Regions Far Apart", bringing a contemporary and sensitive mood to both tunes. The former is fiddle based. In the latter, the quartet plays against a backdrop of accompanying piano (Tom Gibbs) and vibraphone (Iain Sandilands who also plays percussion on a number of tracks), providing a combination that gives you all the frequencies you need for a truly engrossing listen.

Patsy Reid leads for the Strathspey tunes: "Martial Tunes", "Thrown Away", and "Torrent Of A Thing". Here they present possibly the this work's most Scottish atmosphere, with the fiddle melody then being repeated on vibraphone and all supported by piano chords. The next two tunes combine the same instruments with "Torrent of a Thing reintroducing the rest of the quartet.

Jenna Reid leads for the Reel section with "Frenzy In The Coda" and "Under These Notes", two tunes using the string quartet to bring this album to its conclusion. There is a lovely staccato section in the first of these that then leads into said 'frenzy'. For me, there is something compelling about the sound of an unaccompanied fiddle and the final tune is introduced with a glorious minute of just that before the ensemble again takes its place.

Apart from anything else, "The Four Pillars has helped to educate me further into the differences between the four different Scottish fiddle tune types. We don't normally give ourselves enough time to absorb music of this quality, but I doubt there are many lovers of folk music who would want to listen to this album only in sections. It is a masterful piece of work and will be regularly played in my car as I drive around the country in the latter part of the year.

The Rainbow Of Your Last Days