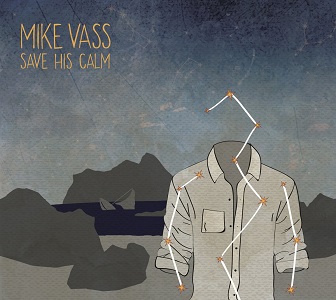 
More usually known as a composer steeped in the Scottish folk tradition, the Nairn-born multi-instrumentalist Vass expands his musical horizons with his first album as a singer-songwriter, a semi-autobiographical song cycle that embraces folk, jazz, pop and indie and on which he's accompanied by drummer Louis Abbot, Euan Burton on double bass, trumpeter Philip Cardwell, Tom Gibbs on piano and clarinet, cellist Su-a Lee and his sister Fi on backing vocals.

Vass turns out to have soft husk, well-suited to these often reflective songs, the collection kicking off with the soul-searching 'They Never Found Me', the line "I can't face you fully or look you in the eyes these days" setting an air of melancholia.

The suggestions of a relationship falling apart are echoed on the whisperingly sung, piano and trumpet burnished 'Done With Calling You', the pain diffused by the forced humour of "the ink's long dried the writing's on the wall," while the softly fingerpicked, gradually swelling, traditional folk-tinged 'Just Enough To Let The Light' with its lilting chorus, Vass sounding at times like a Scottish Paul Simon at his most introspective, reflects on past loves and choices made and lost ("for one or two you've been married away/And I missed my chance to sing you this song").

Another lost love haunts (quite literally it seems) 'Clutching At Straws', the woman of the story who, abandoned forty years ago, now "sits alone at the end of the bed" reading old letters to "grasp the meaning in each twisted line."

Staying on a down note, self-destructive tendencies are at the heart of the languid 'The Rainbow of Your Last Days' with its colour imagery and references to drink that end at a wake, with death - either actual or metaphorical - often hovering over the album, rooted in the fact that, in 2013, Vass contracted neuroborreliosis, a disease the affects the central nervous system, resulting in his having to be put into an induced coma. That's particularly evident in the trumpet-washed 'Gates of Saints' as he contemplates facing moving towards the light, the song inspired by an elderly fellow patient.

'Fly' seeks to lift the spirits somewhat with a jazzy carnivalesque waltz across European soundscapes as it weaves a lighthearted tale of a holiday romance, though it too inevitably ends with the closing of a door as "sorrow grows in the space where love hangs in the air."

It's back, though to mortality for the curtain call, 'As I've Grown Older' the album's most musically turbulent offering, trumpet and percussion erupting in stormy passages as the line "when I was under all I heard was deafening thunder as my mind was torn asunder" specifically referencing his coma, while elsewhere the song reflects on past achievements and coming to know oneself.

Opening with a nervy piano pattern that persists throughout, the final track is the five minute plus 'Walk With Me and Meet My Children', an emotionally devastating, though thankfully not autobiographical, number about the loss of the narrator's twelve-year-old brother in a traffic accident when his car was hit by a drunk driver, his own sense of guilt, the healing power of having children and the wish he was around to see them grow.

It's taken over a decade for Vass to find his voice and use his craft to talk about his feelings rather than provide musical textures to channel those of others. Here's hoping he continues to express himself with the same eloquence.

The Never Found Me