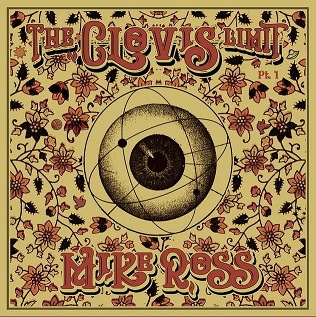 
Born and raised in the north of England but now residing in the south, Mike Ross is something of a wandering spirit, both personally and musically. His life journeys take in Europe, New York, Memphis and New Orleans via Clarksdale, Mississippi and Nashville Tennessee before returning back to England and the softer shores of Sussex. Mike's music is similarly restless, roaming across blues, roots, folk, country and Americana and we are told he is 'Drawing on the incontrovertible connection between the Celtic music of Ross's own Scots/Irish ancestry and the roots of contemporary American music'.

This current album The Clovis Limit (Pt.1) expands upon the above in its reference to The Clovis Theory of early American migration that sought to demonstrate how the continent had been repeatedly re-populated over thousands of years. A consequence of this migration process was the internalisation of music from Africa, Spain and Europe before it reached Ireland and the West Coast of Scotland where the tradition of musical storytelling crossed the ocean to the new world and reconnected with African music carried to the US by slaves, and evolved into the 20th century musical forms of blues, gospel, country, bluegrass, soul and even funk. This inspiration then takes something of a turn to the surreal as Mike notes a further influence through the work of the science fiction author William Gibson, particularly his novel 'The Peripheral' in which ' a post-apocalyptic culture connects with an alternative timeline to re-shape the past assisted by the proprietor of 'The Clovis Limit', a store specialising in 'Americana' and located in a future imagining of Portobello Road'.

The album itself was borne out of a similarly restless process, being recorded in Nashville by Canadian producer Brian Irwin and featuring a bunch of musicians with the pedal steel of Smith Curry and fiddle from Andrea Young particularly to the fore. On returning to leafy Sussex, the record was completed with additional contributions from English musicians and a duet worked out with Elles Bailey, which all in all added up to no less than 12 credited contributors.

Opening track 'The Reason This Railroad' is a fine song to set out the albums musical wares with its tight rhythm section pushing the song through on shuffling drums and bumping bass, all decorated with country guitar licks and pedal steel. Mike Ross has a deceptively soft, gentle voice with a slight husk to it and a conversational way of phrasing his lyrics that hints at vintage Mark Knopfler in delivery.

'Young Man' is stylistically very different, almost vaudeville with its acoustic, gypsy jazz stylings and lyrical musings on the vagaries of youth while 'Ever After' is a pedal steel led modern country ballad musing on a love lost and then duet 'Pick Up Our Anchor' follows in similar vein but with a much more electric, almost Chris Stapleton vibe as Mike trades verses with Elles Bailey.

Track five 'Scarlet Coat' is the joyous romp of contemporary country rock, 'Blow Away' is waltz time loveliness with its yearning pedal steel and fiddle and 'Lily' is slow and reflective with some particularly fine dobro to the fore.

To my ears, the last three tracks on the album are the strongest here and 'Grow In Your Garden' is my personal favourite track on the album by far with its Stax like organ, sharp drums and great soul vocal from Mike Ross, 'Lee Of The Bay' belies its dreamy intro as it rattles through with a distinctly tipsy Irish feel and last track 'Driftwood' sounds so old timey it could have been lifted from the sound track of 'Oh Brother Where Art Though'.

As a final touch, and not sure if it's just on the promotional copies of the CD, there are 4 radio edit versions of the songs 'Young Man', 'Ever After', 'Pick Up Our Anchor' and 'Driftwood'.

Whilst this record references all sorts of influences, the predominance of lap steel and fiddle on most tracks perhaps pushes the sound towards Americana flavoured contemporary country music. This is not a criticism though, and with The Clovis Limit (Pt.1) Mike Ross has presented an album that is full of strong songs all beautifully recorded and, most importantly, it's a very enjoyable listen.