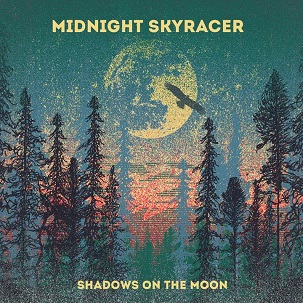 
An all-female Anglo-Irish quintet made up of Leanne Thorose on mandolin, Tabitha Agnew on banjo, guitarist Charlotte Carrivick, Eleanor Wilkie on double bass and Laura Carrivick doubling on fiddle and dobro (with Josh Clark adding percussion), all five providing vocals, although it's Thorose mostly on lead, this is their second album, their first (and the first UK bluegrass act) on a major label, and should effortlessly raise their reputation to the next level.

It opens with 'Average Faces', a Carrivick twins composition, that underlines their genre credentials and sets a self-assured feminist tone as they give the finger to some pushy chancer, declaring "I may need a lover but it sure ain't you/Give a girl some credit, don't you know that I can see through you/You don't seem to get it, just don't get the message do you?"

Likewise, while the banjo-led 'Break The Rules' might seem to be bending the knee " I don't play the fool, but I'd play the fool for you dear"), it is, in fact, a song about not letting things stand in the way of what they want because "Nice girls finish last, you've got to play it fast".

Relationships, the getting and keeping thereof, form the thematic backbone, moving on to Benedict singing Wilkie's banjo dappled 'Right Here With You', except here the song strikes a somewhat submissive note (" I'll follow you where you go/In light or in your shadow/Wherever you wanna be") that rather undercuts the preceding girl power tone. It's back, however, with the urgent, bass-bolstered rhythms of Thorose's 'Crying Wolf' ("I gave you many chances by letting you back in/And now I'm past the point of caring for what could have been") as she walks past her pleading no good lover, "head held high".

Again penned by Thorose, 'The Game' is a more classic honky tonk country waltzer, coming to the realisation that her sweet-talking man's "a lying, cheating thief" and, while her heart may be broken, rather than crying in her beer, she's going to cry his memory away.

Styles shift again for the swing string band groove of the Wilkie-penned 'No Point Knockin'', another kiss-off number ("Bags are packed don't want you no more") as she sends her lying lover off to drown his sorrows down the liquor store ("Last one's on me just get on your way") that conjures thoughts of The Andrews Sisters and Kitty Wells.

Written by Charlotte Carivick, 'Steaming Buzzard' is Southern states flavoured instrumental romp that's an avian relation to that turkey in the straw, followed by Benedict taking lead on the fiddle-led 'Silent Woman', a story song about a long kept secret about sibling rivalry, murder and a hanging thwarted at the last moment.

Another of their breakneck numbers, Thorose's 'Queen of the Broken Hearts' rattles along, spitting out a tale of gambles on romance in the hope of finally turning over the ace slowing it down for, Benedict on lead, the moody strummed guitar and dobro cautionary title track ("Just because you want it there/Doesn't mean the whole wide world will treat you fair") and a reminder to inflated egos that "The earth rotates but not because of you".

Penned by Agnew and Laura Carivick and wistfully sung by Benedict, it's back to the honky tonk for the muted heartbreak of unrequited love song 'Written On My Heart', calling to mind Mary Chapin Carpenter while the melody has echoes of 'Kentucky Bluebird'.

Revisiting earlier themes ("Looks like I went and found some nerves of steel/I'm done with all your blackmail and now I live to tell the tale") they fire it back up for the penultimate track, the Thorose penned fiddle flying swing stomp 'Brand New Start' before closing on a note of calm and acceptance ("winners are sometimes losers/And in life I feel I've won") with, Laura on lead, the sisters' simply strummed, Southern baptist hymnal-styled harmonised 'Feathers and Down' ("Rest your head weary traveller/Lay your pack on the ground/When you've wandered long as I have/The earth feels soft as down") which, with is pretty much their version of the traditional 'I'll Fly Away' as they end singing "I will travel this road onward/'til I reach it's end or mine/When some day I watch the sun sink/And no more will see it rise".

These are most definitely shadows you want to be standing.

Shadows On The Moon