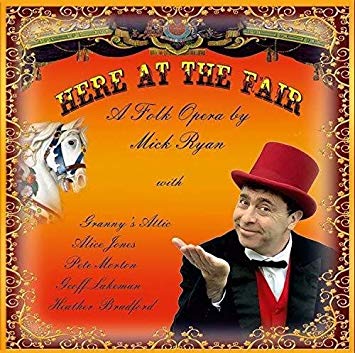 
Here At The Fair is the sixth of the “folk operas” written by superb folk singer and songwriter Mick Ryan. Set at a country fair in 1850, it tells the stories of the travelling showmen and women who set out their stalls and ply their trade against the turbulent political backdrop of the times (the Chartism movement, the poverty brought about by the agricultural slump of the “hungry forties” and the brutal “relief” offered by the workhouse). Like Mick’s previous folk operas, it takes the form of a fairly loose narrative spanning a progression of time and fortune, into which are equal-handedly inserted character studies and vignettes for the principals and a series of ensemble pieces. And as is customary, virtually all of the individual items were written by Mick himself; just a few of the songs are set to traditional tunes.

Again as is customary, Mick demonstrates his knack for gathering together a great cast from among the best performers on the current folk scene, performers who are as well suited to carrying character roles as they are fine singers and instrumentalists. The instrumental accompaniment is perfectly managed, with excellent use made of the contrasting timbres of Anglo and duet concertinas, guitar, fiddle, melodeon, clarinet, mandolin and euphonium. Here we encounter Mick himself in the role of Vincent Crummles, actor-manager now fallen on hard times; Alice Jones as his daughter Ninnetta the “Infant Phenomenon”; Cohen Braithwaite-Kilcoyne as reluctant clown Steven Starling; Pete Morton as Professor Sleary, flea circus owner; Heather Bradford as Madame Lavengro, fortune-teller; Geoff Lakeman as Doctor Maldini, snake-oil salesman; and George Sansome as ballad seller John Smith. Oh, and not forgetting Lewis Wood as an itinerant fiddler. In this instance, Mick has drawn his inspiration for several of the individual roles from specific Dickensian characters, but knowledge of such background isn’t in any way crucial to one’s appreciation of their roles or their ongoing development during the course of the show.

As usual, space doesn’t permit more than a cherrypick of personal selections, what I consider particularly successful contributions or episodes. Without exception, all cast members exudes maximum enthusiasm, and their characters are entirely believable, not just stage-bound replicas. Even so, I must single out Cohen, who could be nominated the star of the show simply by virtue of the sheer quality and assurance of his singing and playing, his pivotal solo Moving On being especially poignantly turned. Other impressive individual moments come with Alice’s two solo songs (We Must Wander and I Can Remember), George’s (thinly-veiled?) autobiography Dancing In The Light; Heather’s touching Hope Was High; Geoff’s Peterloo reminiscence I Was There; Pete’s wistfully self-aware A Good Old Gal; and Mick’s own reflective songs The Old Joke and The Turning Of The Years. But my two favourites are the a cappella spiritual The First Stone (brilliantly led by Cohen) and the rousing first-act finale Worth It In The End. I can’t resist however (though I stress, without making any accusations of plagiarism!), remarking on certain melodic or rhythmic phrases unavoidably recalling specific earlier folk compositions – among them MacColl’s My Old Man (on Hope Was High); The Humors Of Whiskey/Paddy’s Panacea (on Maldini’s Cure); Hopping Down In Kent (on I Have Fleas); Mary Ellen Carter (Worth It In The End); and I Can Hew (on the finale People Must Be Amused). Deliberate? Maybe; but does it matter? Not a bit, in the scheme of things!

Here At The Fair is a fresh encapsulation of everything Mick Ryan does best (and has done before in his folk-operas) – well-crafted, thoughtful and melodic songwriting with a good ear for a strong chorus and memorable line. In that respect, as well as in the theatrical sense, it’s a good old-fashioned folk entertainment, and one that’s built to last and a worthy successor to Mick’s previous ventures, well able to hold its place in that illustrious canon. Perhaps in the final analysis the concentration of individual character portraits allows for insufficient development of a linear narrative – the whole show is more of a tableau-snapshot – but that shouldn’t be taken as a serious criticism in the context that each character is given his/her chance for “moving on” through interaction and reaction. And, importantly, the listener is left in a state of uplift and, through the experience, with a greater self-knowledge.

Here At The Fair