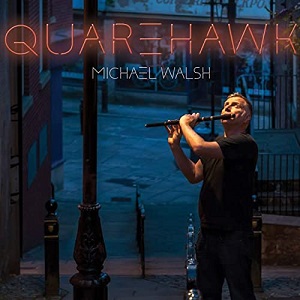 
I think this is how it happened. Michael Walsh followed me on Facebook or I followed him first and he followed back. I listened to two songs from Quarehawk. I bought Quarehawk. It arrived. I listened to it all the way through. I told him how good it is. That whole process took about four days, and a couple of months on I'm still listening. This album connected with me on several levels: I love traditional Irish music; I love originality of music; I loved the the list of musicians involved; and last but not least, I'm a sucker for Riognach Connelly's stunning voice! I have not yet met Michael, but he's only over the hills from here so I guess I soon will.

The album begins in surprising style, with a recording made on a vinyl lathe in 2017 with Newcastle fiddler Amanda Lewis. "The Lathe Revival Part 1: Marian's Favourite" is a Tom Sullivan composition, presumably a tribute to Walsh's tin whistle tutor Marian Egan, and will hook in anyone with a love of traditional music. The phrase "Quarehawk" was used by Walsh's late father Patrick Walsh and has many meanings: it can be a compliment, a warning, or a term of endearment. It can be used in whichever way the user chooses to use it. The foundation of the title track thus established, Walsh delivers a song of beauty introduced by a traditional tune and then complemented by his spoken word contribution in his warm Manchester accent delivered in a style on the level of Christopher Eccleston.

This is possibly my favourite rendition of "The Shores of Lough Bran", with Walsh's voice complementing those of Connelly and fiddle player Bryony Griffith, each taking a verse before combining together for the fourth. It is the song on this album that I find I cannot put down. It interrupted this review because it stops me every time for at least one repeat listen. It is flawless, and a triumph of collaboration, with a further highlight being Liz Hanks gorgeous cello interlude before the final verse. I absolutely love it.

Oh you want me to review the rest of the album too? Well listen on, because here's your introduction to Walsh's woodwind skills combining two tunes "The Boys of Blue Hill / The Stockport Hornpipe", backed by Griffiths' pizzicato violin and Will Hampson's melodeon. The tin whistle continues into "The Visitor", a moving tribute to Paddy Walsh initially with the vocal provided by Mike Garry in powerful spoken word. "for he knew very little of love and hungered the most basic of things". And if you haven't raised a tear after that, Liz Hanks' cello and the quality of production will surely find it for you. Appropriately, Michael Walsh brings the song to a close. It's a moment of closure.

Lifting the mood the Asturian fused pieces "Barralin / Pascuais de Uveu created from a session during a visit to wedding in the north west of Spain. The contrast between this uplifting output and the sadness and reflection of the previous track could not be greater. The mood changes again with Donal Lunny's "Tribute to Peadar O'Donnell", a stunning air combining Walsh's flute with long time friend Hanks once again accompanying on cello. This is a work of beauty and calm, moments of reflection and sadness that would be a fitting tribute to whomsoever it was served.

"Paddy's Return Trip to Athlone" sees Walsh's whistle skills accompanied on bodhran by Mike McGoldrick. Listening through this album you are left in no doubt as to why Michael is a candidate for a Doctorate of Music in the city of Sheffield where he now lives. An atmospheric version of Ewan McColl's "Come My Little Son (England's Motorway)" follows. I know of few writers who can produce lyrics as close to home as this, and Walsh's delivery very much does them justice.

Walsh himself says "the album showcases my repertoire learnt growing up in the Manchester Irish community and documents the emotions and went through after my father died tragically during the recording". One of the attractions of this album is that it never stands still, and while beautifully conveying those sadder emotions it doesn't allow you as the listener to dwell on them. There is always a lift in near sight and "Boys of the Lough / Trip to Birmingham" is a foot tapper in the best tradition, followed quickly by "Ships in Full Sail / Killavil Jig / Michael Dwyer's". Life goes on. Life is to be celebrated.

"The Lathe Revival Part 2: Crowley's Reel" finishes the main part of this uplifting yet moving work, but there is a bonus track "Quarehawk (Kepa Jukera Party Mix)". It would take up too much space to list all of the musicians and singers involved in "Quarehawk", so buy the album, listen to it carefully and read the sleeve notes, because Walsh credits everyone and anyone who has helped him to produce this life-fulfilling work. Beautiful stuff, and worth popping over the hills for after lockdown!