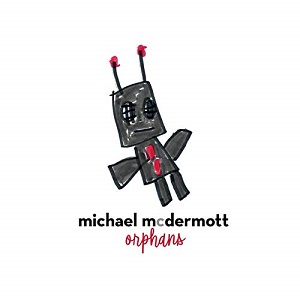 
I was lucky enough to review American singer - songwriter Michael Mcdermott's 2016 release, Willow Springs, and since then he has had an equally successful follow up, 2018's Out From Under. The subsequent swift release of Orphans suggests a collection of some sort rather than another bunch of fresh originals, but as Michael explains "Some songs won't go away. On all my records there's this stack of songs that won't make it and they disappear for good. It wasn't the case this time. This isn't an out-take album. I have an album waiting to go, but these songs were too loud in my heart, they kept waking me at night. These songs are orphans, in much the same way I've felt in the last three years".

Much has been written about his success in the early 90's, comparisons to Dylan and Springsteen and subsequent downward spiral into addiction, but now clean and sober for over four years recent releases seem to have heralded a new lease of life and genuine artistic recognition of his work.

Opening track 'Tell Tale Heart' enters on a crashing drum roll, guitar riff and bumping bass, all topped off with Mcdermott's ragged, lived in vocal that pushes this fine piece of Americana rock through. 'The Last Thing I Ever Do' is a slightly slower, more reflective affair that is lifted with a majestic chorus before the acoustic picking and musing, half spoken vocal of the lovely 'Ne'er Do Well'.

Next track, 'Meadowlark' is one of my album favourites, clattering drums, harmonica and heavily reverbed guitar propel a tale of loss and longing, a recurring theme on the record. 'Sometimes When It Rains In Memphis' is a further track full of regret that boasts another great chorus whilst 'Givin' Up The Ghost' ratchets up the tempo again with a particularly strong drum track to the fore.

'Black Tree, Blue Sky' is simply a beautiful song, stark in story and delivery with its tumbling lyrics, rich imagery and understated vocal before 'The Wrong Side of Town' rocks things up again and then we enter ballad country with 'Full Moon Goodbye' and a suitably epic vocal from Michael.

On to the final three tracks of the record and we have the impossibly jaunty, almost pop sensibility of 'Richmond', then the deeply reflective 'Los Angeles, A Lifetime Ago' which features a lovely guitar line that put me in mind of Steve Earle's masterpiece 'Goodbye', and lastly the majestically sweeping, piano led final track 'What If Today Were My Last'.

As is to be expected now, well crafted songs, great voice and fine band arrangements. I think Michael needs to be a little careful that he does not get too stuck looking inwards and with three albums in three years of broadly similar themes, I hope with his next release he turns his acutely observant writers eye outwards. That is a minor and personal reservation though and does not in any way detract from the outstanding quality of 'Orphans', which is simply another consummate album from Michael Mcdermott.