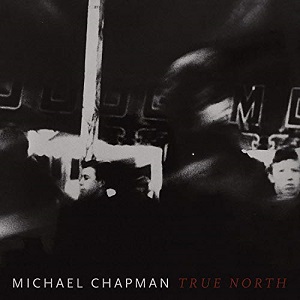 I sort of lost touch with Michael until relatively recently , when I went to see him perform on a double bill with the wonderful Bridget St John at local folk club, The Bothy , in Southport. This re-kindled my interest in Michael’s music and I snapped up his excellent 2017 album “50” , which referred to the length of his career in the music business.

“50” was released on the excellent Paradise of Bachelors label and was produced by Steve Gunn , who is one of my favourite contemporary guitar players .

Now, at the tender age of 78 , Michael is releasing another new album on Paradise of Bachelors , namely “True North” , which is again produced by Steve Gunn and which features a superb group of musicians comprising Michael and Steve on guitars , the legendary B J Cole on pedal steel , Sarah Smout on cello and the aforementioned Bridget St John on vocals. Together , this stellar line-up create a shimmering, elegiac accompaniment to Michael’s deeply personal lyrics ,which are concerned with the passage of time, regret over lost loves and mortality , themes which run through the album like a seam of millstone grit.

The album’s opener “It’s Too Late” sets the scene ,with the narrator waking up in a “broken-down hotel” with “a bottle of something strong and cheap” thinking how he didn’t know that he wanted a certain person “until it was too late”. The brooding atmosphere is cut through by B J Cole’s searing pedal steel.

“After All This Time” has an interesting back-story which Michael describes thus : “In a bookshop I met a beautifully dressed woman of a certain age who said “It’s Michael , isn’t it?” I said “Yeah” , it wasn’t a difficult question . A lengthy pause followed , then she said “We were married for four years”. Not my finest hour . Out of that came this song.

The female part is sung deliciously by Bridget St John and Sarah Smout’s yearning cello echoes the feeling of regret and resignation as to how the couple “grew up, grew apart – found other dreams to be pursued”.

“Vanity and Pride” perhaps sums up the theme of the album. A touching, reflective solo performance by Michael who muses “If only time were on my side when I’m fully loaded and ready to ride”. The reflective atmosphere is perfectly captured in the following beautiful , haunting instrumental “Eleuthera” , which is named after an idyllic island in The Bahamas.

“Bluesman” is a bold statement of defiance , where the narrator defends his lifestyle [“living high is no disgrace”] and his determination to keep on doing what he knows best and to"Let the good times roll. Let the bluesman play”.

“Full Bottle Empty Heart” has an appropriate country music, tears-in-my beer atmosphere, courtesy of B J Cole’s pedal steel and Bridget St John’s harmony vocals . It’s a song of ultimate despair – “I’ve got nothing more to give, there’s nothing left for you to take unless you really want to hear the sound of a heart as it breaks”. Strong stuff ,indeed.

The evocative “Truck Song” is a shimmering beauty of a song which combines plangent pedal steel, acoustic guitars and cello over which Michael’s smoky, lived-in voice languidly floats before it leads into the achingly beautiful instrumental “Caddo Lake” [ which is named after a Bayou lake on the border between Texas and Louisiana].

There’s more regret over a failed relationship in “Hell To Pay” where it “almost got too good ,almost got too right” , whilst “Youth Is Wasted On The Young” regrets lost opportunities [ “So many songs we left unsung” , “So many futures now all are gone”].

The album closes with the relatively upbeat “Bon Ton Roolay” which is a “morning after the night before” song which has more than a touch of the John Prine’s about it.

In summary ,this is a superb album by a master craftsman . Beautiful ,yet brutally honest and personal , it is the work of an artist of advanced years baring his soul to the world, warts and all.

The album has a thematic continuity which is amplified by the stunning playing of a superb group of master musicians. Miss it at your peril!