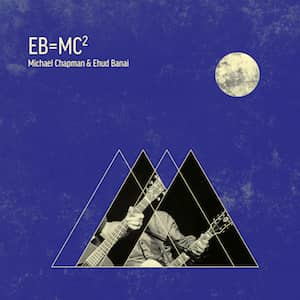 
For Michael, 2017 has been a productive year that has seen him bookending its twelve months by the release of two contrasting new albums. First there was 50 (reviewed on this site), which placed Michael in a new (“American”) band context in the celebration of his half-century-to-date career. Now there is the typographically challenging EB=MC2, which partners Michael with Israeli guitarist Ehud Banai. Its gestation stemmed from Ehud finally getting to see his guitar idol perform live, in a small Jerusalem club in the winter of 2013, an occasion on which Ehud was the opening support act. Mutual admiration and a close relationship developed, and this was cemented on a subsequent second tour two years later.

Happily, the two musicians were then tempted into a recording studio, and the result is this record, which not only is chock-full of brilliant musicianship but also expresses very strongly the extent of their mutual love for their instrument (the guitar) and its universal magical properties. Their warm cross-cultural collaboration is best epitomised by the somewhat obviously-titled fifth track on their joint album, Guitartar, an equal-handed modal instrumental piece involving both named instruments (guitar and tar).

The album’s also notable for its fresh explorations of familiar songs from the Chapman catalogue like Soulful Lady (here really transformed and making an arresting opening gambit), Sometimes You Just Drive and The Mallard. The latter conjures a particularly inventive soundscape, where Ehud’s florid ramblings and effects and embellishments from cellist Maya Belzitsman provide an ever-changing, scintillating backdrop. Ehud’s own compositional skills are well represented too, with lyrics (in both Hebrew and English) for Rosh Pina, and (jointly with Michael) writing music, or both music and lyrics, for Angel and Birdman; This Thing Has No Name, although nominally a joint composition, just has a bit of fun repeating its title amidst extemporised guitar wizardry. Michael’s also composed an affectionate instrumental tribute to his new-sound friend Ehud.

Throughout this set, the shared playing and learning experience generated by the two master musicians is palpable and, seemingly (astoundingly) virtually symbiotic. There’s a true frisson in this collaboration, which translates its universal musical language through the medium of the exceptional, truthful recording.

EB=MC2 really is startlingly good, and another groundbreaking musical and artistic landmark in Michael’s illustrious career, during which he continues to live long and prosper. Splendid!