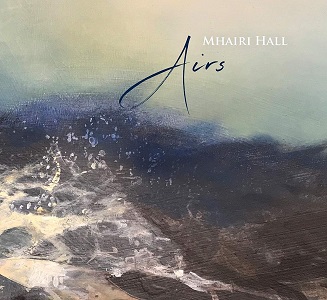 
There seems to be a welcome trend in modern folk music for the reflective and the gentle. We were all in need of it even before the pandemic struck, and Aviemore born Mhairi Hall's album "Airs" released on 31st January, is a beautifully crafted, settling piece of work that helps us escape the frenetic pace and viral concerns of modern life. "Regarded as one of the finest and most creative pianists in Scotland", there is a depth to each of these carefully considered pieces that you will only find emerging either from genius or professional experience, and I think here we have found a blend of the two.

In the opening, original composition, "A Peak Apart", the piano melody is sensitively backed by the silky drone of a harmonium, setting the standard for an almost entirely instrumental album of tunes that absolutely should not be skipped. The first of six traditional pieces "Skye" (An Old Skye Air) evokes the sights and sounds and stunning natural beauty of the island. The clarity and care of the album's production shines through and here it stops you in your tracks.

"Màiri" features the only vocal on the album, and references the views over the sound from the Scottish mainland to the peaty hue of the Isle of Jura. Some of the piano chords in this piece are absolutely sublime. Sounds from the sea introduce "St Kilda". There are few places in the world more peaceful than a Scottish island out of the tourist season and this track truly captures that mood.

A second original composition "Lullaby For Eilidh" was written for Hall's six year old daughter when she was a baby. "Composing this was a little step in feeling that I could continue to be a musician and we would find a way to make it happen alongside being a mother" (Vents Magazine interview). The optimism of this piece is something for Eilidh to treasure forever. "Crear" is another original tune, seeming to bestow gratitude on 'Space to Create' (https://www.crear.co.uk) at Crear by Tarbert in the west of Scotland where the album was recorded on a Model D Steinway Concert Grand Piano. The piece begins with a mix of harmonium and gentle percussion, and continues to uphold an awakening, optimistic mood.

The final three pieces are arrangements of traditional airs. Mhairi Hall cites an online resource 'Tobar and Dualchais/Kist of Riches' as the source for some of her material. "Sìleas" sees Hall's skills accompanied by Aonghas Grant on fiddle, backed by an ebbing and flowing harmonium drone. "Ae Fond Kiss" provides for me finest the piece from this wonderfully relaxing album, its careful production facilitating "waves of ambient, warm sound" in the room. There has long been a dispute over whether "The Parting Glass" is originally an Irish or Scottish folk song. It has seen many manifestations over the centuries (The Peacock, Sweet Cootehill Town among others) but the strongest theory seems to support its origin as a 17th century Scottish song. Hall's rendition enhances the Scottish claim.

This is an album very much rooted in Scottish tradition, and a passion for that beautiful country where Hall teaches the music students the history and culture of the music. This is a very fine album.