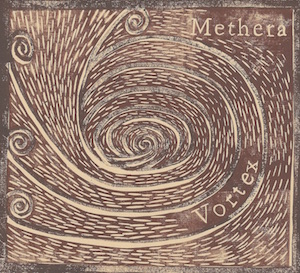 
Methera say they are "blazing a trail through the uncharted territory that lies between folk and chamber music." A string quartet that have firmly rooted themselves in English traditional music have looked further afield with their latest offering, Vortex. As a live act, they perform in the round, facing inwards to enhance the connection between the players as well as drawing the audience into their intimate music. While that visual intimacy is lost in a recorded format, the connection between the musicians is most definitely not. The oneness of their music shows a great meeting of musical minds, sharing a common vision that clearly communicates throughout this album.

The opening track, Lily starts with a very strong opening, the quartet creating a full and rich sound that contrasts with the more reflective minor B part. The character changes in a central section that starts fairly steadily in unison, then accelerates as harmonies are added and the B section slips in underneath to anchor the wildness before returning to the strong and stable opening. This is followed by a lively traditional number, Rising Sun. The interplay between the instruments in this is really engaging, creating intricate interlocking conversations between the instruments. The texture varies from the full quartet to a duo or trio, constantly changing and drawing the ear in. At one point the violins play the tune in canon which is very light and as they drop in pitch with the tune they draw the viola and cello back in to reenergise the tune.

The title track is a 10 minute suite of three tunes. I love the use of harmonics in the opening, creating a rather otherworldly sound world for John's New Year's Waltz to grow from. The shape of the tune perfectly captures the image of swirling snow and the crispness of a Winter's evening. The transitions between tunes are almost seamless, joining three very different tunes together cohesively. The dissonant harmonies in the upper strings sitting over the cello melody for Gröna visan work really well, giving a sense of direction as they create tension and then release as the harmony resolves. A repeated pedal note provides the vehicle for change into the last tune, another Dipper original which develops with a deep cello bass line and really intricate passagework between the violins and viola.

Another intriguing introduction is the use of pizzicato in The Fox, the solo cello being joined to create a three part accompaniment to a beautiful and haunting tune by Lucy Deakin which segues into a lively and driving tune from violist Miranda Rutter. A trip to Sweden comes courtesy of Olov Johansson's fantastic Hagsätra brudmarsch, another full and vibrant sounding arrangement brimming with joy and excitement. The album finishes in reflective mood with Late Longings, a beautiful tune by Paul Mack.

For me, the two stand out tracks are the pair of jigs, Da Shaalds O'Foula and Old Favourite, and the Baroque influenced Love Lies Bleeding. The jigs are both brilliant tunes that make me smile the second they start. Love Lies Bleeding reminds me initially of some of the chamber music of Geminiani and Oswald, based on traditional melodies but in the Italianate style that was popular at the time.

As a baroque violist, chamber music is still one of my favourite things to play, the interaction with your fellow performers and need to engage with one another to produce one performance. Methera have this down to a fine art and Vortex is an album that oozes style and confidence.