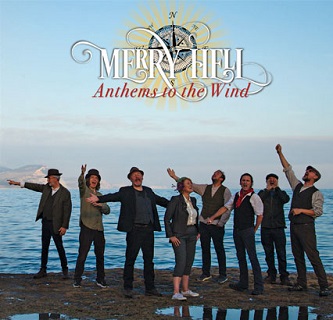 
Huzzah! The eagerly-awaited new album from multi-award winning North-Western guardians of tip-top folk-rock and original songs, the phenomenon that is Merry Hell, is released at last.

Q. Was it worth the wait?
A. Does a one-legged mallard swim around in circles?

On first listening, Anthems To The Wind sounded like an instant corker. Several plays later, a more considered opinion confirms that it is, indeed, destined to be one of the releases of the year.

In the eight years since Merry Hell evolved from the still-glowing ashes of the 90s punk-folk band, The Tansads, the band's star has been firmly in the ascendancy. During this period, there have been four highly acclaimed album releases. 2011's debut Blink was followed in 2013 by Head Full of Magic, Shoes Full of Rain, an album which not only garnered 5 star reviews but also Album of The Year nominations and awards. Their third album, There's A Ghost In Our House and other stories, saw acclaim for the band expand beyond these shores, whilst the fourth, Bloodlines, not only gained further Album of the Year nominations and awards and reached Number 1 in the Amazon Folk Charts, but the single, Come On England, was also named Single of the Year by this very publication.

Whilst Merry Hell is a self-proclaimed eight-piece folk-rock group, which retains the nucleus of five former Tansad members, i.e. brothers Andrew, Bob and John Kettle, along with keyboard player Lee Goulding and Andy Jones on drums, the addition of Virginia Kettle, (wife of John), on vocals and guitar, together with bass player Nick Davies and old friend Neil McCartney, (fiddle), has added several extra dimensions to the group, not only in terms of the sonic palate offered, but also in terms of developing the already strong elements of song-writing and stage-craft.

In addition to the plaudits related to recordings, the group have received further accolades for their live performances, again winning awards for Best Band and Best Live Act. Whether performing in front of a large audience at a prestigious festival or a smaller, more intimate setting, for example a folk-club, their boundless energy and enthusiasm, together with an uplifting sincerity and belief in their musical message, is always apparent.

On occasions, however, a smaller version of the band, affectionately known as Merry Hell Acoustic, (probably in contravention of some archaic Trades Descriptions Act), create their own brand of acoustic (sic) Merry Hell, thus reducing the unstoppable 8-piece charabanc to a mere 6-piece Robin Reliant.

Anthems To The Wind is a product of this off-shoot project, albeit with contributions from all eight members of the parent band. Acoustic in focus, the album has been mainly recorded live in the studio and offers both re-workings of some established favourites together with some new offerings. With the exception of the Trad.arr. of The Banshee Reel, all songs are written by members of the group. To have one or two accomplished songwriters in a group is obviously beneficial, but having three, (as on this album, rather than the even greater number credited on previous outings), is bordering on the greedy. There is, however, no sacrifice in terms of quality, and the listener can be assured that nothing has been compromised in the band's wish to deliver an effervescent and inspiring aural delight.

The CD opens with live favourite Drunken Serenade (featuring The Banshee Reel), written by Bob. The first song ever played live by Merry Hell, and also the final track on The Tansads' 1998 swansong album Reason To Be, the version presented here features Neil's very much to the fore, and is delivered in a way that suggests that the band could give any Celtic-leaning fiddle band more than a run for their money. For those who are cognisant of the Blink version, but have not heard the version which appeared on the Come On England EP, I'd wager that this opener will be a surprise sonically, but it is a wonderful arrangement and a great opener.

My Finest Hour, is a jaunty track written by Virginia which initially appeared on Head Full… Here, however, it is Virginia, and not Andrew, who takes the lead vocals. Gone also are the electric guitar chords and drums, as Bob delivers wonderful solos on a track that oozes bonhomie and joy.

Another Virginia composition follows with No Place Like Tomorrow. Here, her delicate vocals blend oh so perfectly with the violin and acoustic guitar in a beautifully delivered song which has a slow-air quality to it. One of two songs taken, and re-arranged, from the There's A Ghost recording, this may well be

'A song to the weary, the fractured, the broken'

but, ultimately, like so much of the band's output, it is one of optimism

At the risk of committing an unforgivable crime of an oxymoronic nature, the stunning version of Bob's Over The Border presented here has a gentle, but almost terrace-like anthemic opening, which I predict live audiences will imitate in full Queen-emulation mode, singing loud and proud. Andrew's perfectly judged voice is introduced, eventually violin and acoustic guitar take up the mantle before an ending which sees a vocal contribution from Virginia of ethereal, celestial quality. The original version of Virginia's Loving the skin you're in (sleeve capitalisation, or lack of!) featured electric guitar power chords, a full drum sound, together with banjo. On this re-working, however, a much more stripped back performance is given, with violin and vocal whoops (!) much in evidence, and when Virginia's vocals kick in at around 40 seconds, it is one of those 'wow' moments, that this writer has been fortunate to enjoy on so many occasions when seeing the group live.

Bob's This Time has also been given a fairly substantial makeover, gone, for example, is the electric guitar of the original. Instead John and Bob give symbiotic support to the feelgood-factor vocals of Virginia and Andrew. , whose performance on this disc will hopefully redefine the term V & A.

The seventh track sees the first of the two compositions from John to appear on the release. Lean on Me, Love was first recorded on Blink, before re-appearing, in a slightly different form on the Come On England EP. The version recorded here is slightly longer than the original and shorter than on the EP. Gone are the chugging drums and rhythm section of the original, the introduction has been slowed down, Andrews vocals appear more controlled, (compliment not a criticism of the original), and the song appears to build more naturally. Also, whereas on the original the female vocals appeared well down, or absent, in the mix, here Virginia is much more apparent.

The delivery of the lines

'When you've given all that you can give,
And your wallet's leaking like a sieve,
When they're repossessing where you live,
Lean on me love'

is just one example of the sublime harmonies delivered by Virginia and Andrew, whose performance on this disc will hopefully help redefine the term V & A.

Also, the inclusion on the recording, of the dramatic, almost theatrical, device of a very brief silence,

as they perform it live, is, perhaps, just one small example of the care, precision and thought they put into their body of work. As a further development, it would interesting to hear the flute or whistle of Ranagri's Eliza Marshall on this (pace Michael Goldrick).

Another live favourite, The Butcher and the Vegan also makes the cut here. By my calculations, this is is one of the 5 songs on this collection that were performed at that debut MH gig at The Citadel, St Helens, and the 6th from the Blink release. This witty and amusing Virginia composition appears here in a much more stripped back form, and is truly a love song for the modern age.

The live version of Virginia's The War Between Ourselves which appeared on the Come On England EP to these ears sounded like a wonderful Waterboys/Ultravox mash-up, with added, almost visceral guitar from John. Here, Andrew is given more sonic space in which to express the anti-war sentiments with great passion. Neil's superb fiddle playing only adds to the raw power and emotion of this superb song.

The CD ends with something of a Tansads sandwich. Bob's Fear Of Falling, originally appeared as the second track on side A of The Tansads' 1994 Flock LP, and was a full-on number, driven by a full rhythm section and Lee Goulding 's keyboards. Once again, it has been masterfully re-worked here and the band have produced another gem that encapsulates the sheer joie-de-vivre of the group, toe-tapping is unavoidable.

With Virginia's Leave a Light On, Andrew's lilting solo voice is outstanding, doing full justice to the composer, then, the heavenly sound of Virginia joins him and the listener cannot fail but to be drawn into four and a half minutes of pure bliss. For me, this would be the perfect way to end a live set (as third or fourth encore, of course).

For the final track we return to John, and The Tansards. Satisfied which first appeared on their 1993 single Camelot, here is given full acoustic MH treatment, as a gentle acoustic guitar and violin introduction give way to Andrew's vocals. Virginia joins him and the humanity that often exists in the lyrics of the group take a grip

A formidable track to end a compelling album.

For those who know the band well, Anthems For The Wind will be a must-have addition to their collection. For those who are new to Merry Hell, this album will hit you between the ears and you will be hooked.

In pure musical terms, Anthems For The Wind captures the essence of a more intimate Acoustic Merry Hell performance perfectly. The consistently high quality of both song-writing and delivery is present in profusion on this release.

It is only to be hoped that the magical experiences, joys and passions relished by those attending the more intimate gigs will not disappear as the group continue on their upward trajectory, indeed as they sing their Anthems to the Wind loud and proud, far may they travel.

Purchase several copies of this CD and spread the celebration of community, togetherness and love engendered by a group whose aim of "our pleasure is to please" is surpassed on every occasion, be it live or recorded.