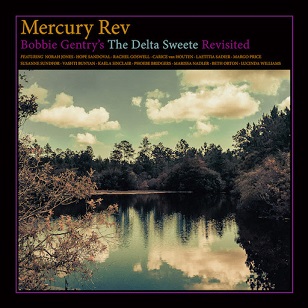 
In 1967, Mississippi-born Bobbie Gentry spent four weeks at No. 1 on the Billboard charts with 'Ode To Billie Joe', the subsequent album knocking The Beatles' Sergeant Pepper off the top of the charts, Gentry going on to win three Grammys. A year later, the follow-up, The Delta Sweete, stalled at 132. She released her final album in 1971 and, 11 years after coming to fame, effectively retired from the business aged 36.

Over the years, that second album has gradually gathered cult status (in the new liner notes David Fricke calls it the first country-rock opera) and now Mercury Rev, joined by an assortment of guest female singers, are looking to put it back in the spotlight and honour both it and Gentry. It's not a recreation but a reinterpretation and it also omits her cover of Doug Kershaws's 'Louisiana Man', which was the penultimate, track and replaces it with a dry and cracked five and a half-minute version of 'Ode' echoingly-sung by Lucinda Williams, who has often included it in her live shows.

Otherwise, it follows the original's running order, opening with 'Okolona River Bottom' Band, transforming it from a Stonesy southern swagger into a sultry slow burn with piano and Norah Jones on vocals. Likewise, where her cover of Luther Dixon's 'Big Boss Man' was a harmonica wailing roadhouse blues a, la Dylan's 'Tombstone Blues', here, languidly sung by Hope Sandoval and backed by a lazy organ it's a narcotic prowl.

An itchy rhythm, rowdy swamp stomp with a prototype rap section, overlapping background chatter and lyrics that reference events regarding Billie Joe and the Tallahatchie river, 'Reunion' is now strings-drenched psychedelic dreampop interpreted by Slowdive's Rachel Goswell while Gentry's sparse, horns-flecked take on Mose Allison's 'Parchman Farm' becomes an echoey and reverb cosmic blues sung by Carice van Houten that even has a touch of The Doors about it.

Arguably the heavily orchestrated version here of 'Mornin' Glory', crooned by Stereolab's Laetitia Sadier, misses the post-coital intimacy and calm of the original version, but such thoughts are brushed aside when Margo Price takes charge of the blues shuffle 'Sermon', which keeps the bare bones of the original tempo but comes swathed in a trademark Mercury Rev miasma of sound.

On the original album, it's arguable that Gentry's reading of John D Loudermilk's 'Tobacco Road' was a little musically undernourished given the lyrics. Here, however, sung in icily sharp tones by Norway's Susanne Sundfør and driven by a throbbing bassline and thumping drumbeat, it has considerably more muscle, even if the big orchestral climax is a tad overegged.

It stands in direct musical contrast to the wounded pride of 'Penduli Pendulum', piano and horns bolstering the strings, veteran British folkie Vashti Bunyan capturing the original's homespun quality before being joined by Kaela Sinclair and a more electronic sheen. A new indie folk name, Phoebe Bridgers brings an air of 60s coffee shop folk to 'Jessye' Lisabeth' that could probably have done without the string arrangement, but, on the plus side, despite the electronics and keyboards, 'Refractions', sung by Marissa Nadler, still retains the traditional English folk colours that set the original version apart from the surrounding material.

Prior to the Williams track, the reconstruction/deconstruction concludes with a vocally soaring Beth Orton on 'Courtyard', the minimal strings and acoustic guitars of Gentry's plaintive folksy recording here exchanged for an airy, open skies feel with what sounds like a shimmering harp and whistling.

Quite what those who treasure Gentry's recording will make of this is anyone's guess, while Mercury Rev fans raised on their psychedelic, sometimes squally, sometimes ornate, indie rock may be just perplexed, but if both factions are willing to immerse themselves in the makeover and the array of guest vocalists, then they may well find themselves revisiting this on frequent occasions.