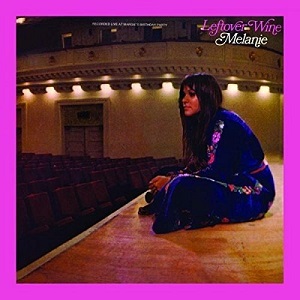 
This 1970 LP bears the legend "Recorded live at Margie's Birthday Party". Margie being journalist Margie English, whose brief reminiscence of the event provides the liner note for this release. 11 of its 12 tracks were captured at said event, at New York's Carnegie Hall, where Melanie gave a brilliant solo (voice-and-guitar) performance that brought the house down for sure. All the applause and between-song talk is left in, and the sense of wide-screen intimacy is not as much of a contradiction in terms as it might appear in the context of the continuous experience.

The force of her musical personality is compelling to say the least, and to call her act arresting is an understatement. Having said that, the raw, in-the-face, stripped-down delivery will not be to everyone's taste, and it may not be one you'll want to repeat often - but I view it as an important document of an extremely intense concert experience, one that I'm pleased to have on my shelves now. The material performed takes us from debut-album standouts Close To It All and Momma Momma through the valedictory The Saddest Thing and on via the inevitable Beautiful People and the powerhouse Tuning My Guitar to the fun stuff of Psychotherapy (which she presumably needs after forgetting the words to Animal Crackers a few songs previously!).

This concert recording may be Leftover Wine, but the delicate bouquet of its vintage is clear and to be savoured. As on the LP's original incarnation, this reissue supplements the concert set with a studio take of Peace Will Come complete with band - which doesn't feel out of place here with its hopefully jubilatory air.

This Talking Elephant release is, I believe, Leftover Wine's first appearance on CD in the UK (there was an American issue in the early-90s), so is to be welcomed - although (like most live sets) it may be seen as being of special value to Melanie aficionados rather than new converts. And yet, personally I feel it penetrates to the essence of Melanie more effectively than some of her studio albums.