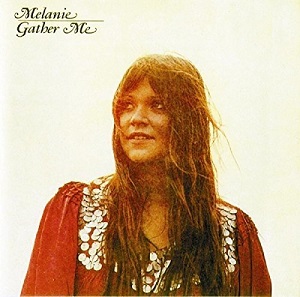 
Gather Me has been regarded as something of a coming-of-age album for Melanie, although it could also be argued that her talent was already mature when she released her challenging debut LP Born To Be (just reissued by Talking Elephant). By the time Gather Me was recorded (1971), she already had eight or nine albums under her belt, and a couple of years had passed since she'd been dubbed "voice of a generation" after stunning the crowd to silence at Woodstock in summer 1969.

Gather Me was an accomplished, if more orthodox-sounding collection that capitalised on her capacity to enchant as much as her thought-provoking songwriting. Although nowhere near as extreme as Born To Be in terms of stylistic contrasts, it still ranged widely, with the introspective Little Bit Of Me and Center Of The Circle, the plaintive chanson Some Say (I Got Devil) and the miniature Ring Around The Moon balanced by the celebratory gospel-style incantations of Ring The Living Bell (with its vibrant Oh Happy Day spirit) and a return to the childlike with singles Some Day I'll Be A Farmer and Brand New Key (her "greatest hit").

Melanie was still being showcased as a captivating singer, but her vocal quirkiness was played down somewhat, at least outside of that hit single! Still, the album contains plenty of strong moments, like the steamy bluesy Railroad with its interesting orchestral arrangement that covers a lot of territory in just under three minutes, the memorably charming Baby Day and the affecting little riddle Tell Me Why.

Gather Me is making only its second appearance on CD (the 1992 edition being long out of print), but my celebration is a touch muted when (as with Born To Be) I find nothing in the way of background information or liner notes, just a cursory reproduction of the personnel credits.