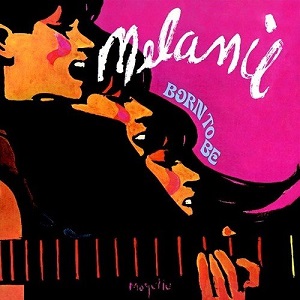 
Remember Melanie Anne Safka-Schekeryk? Plain old Melanie to you and me of course (well, would you really like to go around with that mouthful for a stage name?) This is Melanie's "Aquarian Age" album. Her very first LP, on the Buddah label, recorded when she was just 21, and released later that same year (1968). It introduced to the world THAT voice - once heard never forgotten, highly original, quirky and distinctive - that astounding instrument that was to become such an icon of the Woodstock Festival just a year later. Although a singer-songwriter by trade, the range of material on her debut LP was even by that yardstick really strange, and really untypical of the s/s-troubadour image of the era. Both emotionally and structurally highly unpredictable, and defiantly non-conformist on all counts. And couched in remarkably adventurous orchestrations that owed little to even the Phil Spector, Jimmy Webb, Van Dyke Parks or Brian Wilson schools.

It's hard to imagine what record buyers would have made of this challenging and far-sighted - and decidedly non-commercial - album back in 1968, as it still sounds a pretty radical mix today, nearly 40 years on. The opening track (In The Hour) oozes eerie Parisian café and rises to some astounding vocal acrobatics, after which Melanie delivers a segment of oddball showtime razamatazz (I'm Back In Town) that could've crooned its way right out of Kurt Weill - well, it sure grabs the attention if nothing else! Melanie gets down to the serious weirdness with further extraordinary vocalisations on Bo Bo's Party (which somehow later became a hit single in France). Following this, she delivers the LP's arguably most magical defining moment, a heart-stopping cover of Mr. Tambourine Man, complete with a chilling orchestral arrangement that mirrors the pinpoint precision and aching expressiveness of Melanie's singing. A compelling persona is maintained for the intense emotional dramas of Momma Momma (which musically somewhat recalls the format of Morning Dew) and I Really Loved Harold, before the almost casually dispatched chugalong of Animal Crackers, whose jaunty fa-la-la setting barely conceals its sinister message. The demeanour of a naughty, insistent child is captured on Melanie's spare setting of A.A. Milne's cautionary Christopher Robin poem, while inclusiveness is the theme of the tender entreaty Close To It All before the LP closes on a festive note with Merry Christmas, a desperate and slightly nightmarish outing that leaves a disturbing taste and an ambiguity to the words of the time-honoured seasonal message.

Melanie's voice is likely to be one that you either love or hate (I love it!), but you can't deny the massive uncompromising confidence she displays, the sheer force of presence and personality she possesses, even at this early stage of her career. I feel she has much of the commanding quality of Piaf, imperious but in a childlike way. Although I later came to really rate the originality of her interpretive vision on classic covers like Ruby Tuesday, I was also previously guilty (like many listeners, I suspect) of writing Melanie off as a bit of a novelty act, and never really got round to investigating her wider output at the time, so I now really welcome the chance to reassess her music. Especially since most of her canon has been out of print for too long (I only recall the C5 label CD reissues of the early-90s). Hopefully, Talking Elephant will be able to give us reissues of the rest of her early LPs in due course.