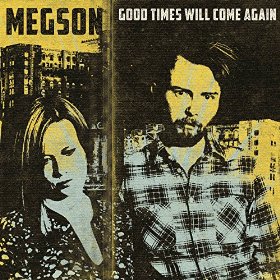 
I've been lucky enough to be in a position to follow Megson right from the start. Back in the day when we used to award stars in reviews, they were the first act we ever awarded five stars to, a level of quality they have always lived up to.

Consisting of Stu and Debbie Hanna, Megson originally hailed from Teesside before making their way to Hertfordshire's, folk bastion, town of Hitchin, where they continue to be based.

As a duo they have always been seen as innovators, one of the reasons Stu has been regularly in demand as a produced right across the acoustic spectrum and beyond.

They were also responsible for reviving the tradition of the folk fairytale album, featuring both traditional and self penned songs, the latter of which included a substantial amount of social commentary, bring us neatly to their new album.

"Good Times Will Come Again" is the first Megson album consisting of self penned tracks, kicking off with "Generation Rent". It's a track that leaves you in absolutely no doubt that they have lost none of their observational/political clout as they focus on the issue of generations of a family being forced to live under the same roof or pay hard won cash to landlords because no one can afford to buy.

Other songs follow other social and political themes, making this a traditional, old world, folk orientated album albeit with very contemporary stylings and arguably their strongest album to date. They have knowledge of events, they know what switching a furnace of actually means, physically as well as socially

"Good Times Will Come Again" is more than just a social commentary, in the same way as it contains many shades more than dark, both album and title tracks still have a buried optimism that things can get better again, though it will be hard.

Megson continue to deliver excellent songs that relate to the many because there are so many experiences that have in common with their listeners and they are fantastic at articulating them as songs, it's what makes them so fascinating as a duo. They continue to innovate, and evolve their music. it's what makes their albums so much fun to listen to. Needless to say, this comes highly recommended.