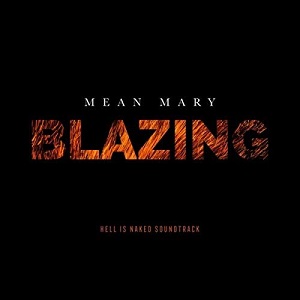 Mean Mary
Album: Blazing
Label: Woodrock
Tracks: 10
Website: http://www.meanmary.com
.That'll be Mary James, an award-winning author and bluegrass musician, her new album a musical soundtrack/accompaniment to her latest mystery novel Hell is Naked, co-written with mother Jean, which tells the story of a for SWAT officer now working as an offbeat investigator in Hollywood. The tracklisting on the inner sleeve features an extract from the novel putting each number into context.

The album's a mix of songs and instrumentals, the latter especially showcasing her lightning fast banjo playing skills. It kicks off with the former in the shape of noirish slow blues 'Harlequin' before proceeding to two frisky tunes, the bluegrassy banjo picking of 'Rainy' and, with Frank James on 12-string, the staccato tango rhythm (with castanets) of 'Lights, Gun, Action'.

The first of three further vocals gets under way with another display of banjo runs for a full acoustic band arrangement of the dos e do'ing 'Sugar Creek Mountain Rush' , followed in turn by a down the bone 6-string banjo slow waltz setting of the traditional 'Rock of Ages' and, picking up the pace with James on violin the goodtime shuffling 'La La Hoopla La'.

The title track itself is another energetic banjo and 12-string instrumental with Frank also on stomp, preceding the acoustic slow picked, downbeat folk blues 'Gone', the closing chapters playing out with the novel's title, the torch slow tango cabaret feel of 'Hell Is Naked' featuring James on gypsy guitar and violin, and, finally, bringing on electric guitar for the first time, the repetitive riff driven 'I Face Somewhere', James' vocals tumbling over themselves in a Buffy Sainte-Marie fashion. It's a page turner.