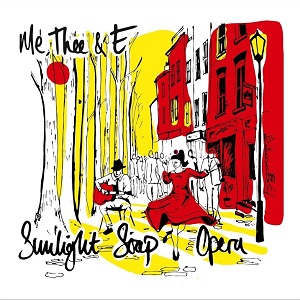 
Me, Thee And E are a songwriting duo formed in the summer of 2017. Tom Gill and Evie Rapson's music grows out of a shared love of classical music, folk and jazz. Sunlight Soap Opera is their first album after 18 months of touring the material. There is an unstudied effortless cool that shines from this album, the musicianship, the light and space around the music, that air of restrained passion and understatement, the hand drawn illustrations on the cover connecting to 50s Verve and Clef Record sleeves, all definitely breath cool.

Track one Mariner's Hue is a perfect mix of Evie's classically trained voice with a hint of that jazz playfulness and just a touch of a gutsy blues roar alongside Tom's baroque folk guitar. A slightly looser jazz tinged incarnation of Josienne Clarke and Ben Walker. Northern Line features a literally breathtaking vocal from Evie, full of woops and falls that make you wonder where she takes a breath. Beautiful violin and powerful cello from Emily Lawler and Rachel Brown.

Sunlight Soap Opera the track has a fleet fingered guitar from Tom like a Ed Sheeran or Newton Faulkner, lightness comes from Evie's backing vocal and Kate Joynes on flute. Take To The Night is a perfect example of what you can do with a beautiful voice and an guitar weaving folk and jazz chords. Fans of John Renbourn playing with Dorris Henderson or Jacqui McShee and the minimal 80s North Marine Drive by Ben Watt, will find much to enjoy.

Like I Love You has delightful folk guitar playing by Tom and Evie swooping and flying through the lyric with all of the lightness and life of a jazz singer while avoiding any overly virtuosic florishes or ornamentation. Mathematician and Bee Sting layer Tom high guitar against the lower notes of the cello and Evie offers vocals that can be intimate or raunchy blues growl, as the words dictate.

All the musicians know when to rein it back in to create atmosphere and tension. Rose has the picked guitar off an achingly cool 60s Verve Brazilian Stan Getz album, while Evie on a get up and go for it lyric just soars between folk and jazz. "You are yours, you should dream" are affirming, positive and uplifting sentiments to end an album on, leaving a glow.