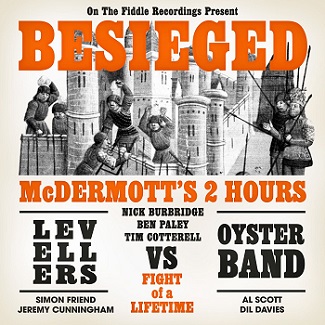 
The decidedly clumsy nomenclature (one also strictly incorrect since this is a collaboration rather than a confrontation) signifies a coming together of the rowdy Celtic punk-folk trio, headed by Anglo-Irish singer-songwriter/playwright founder member Nick Burbridge, here joined by fiddler Ben Paley and multi-instrumentalist Tom Cotterell, and two members each from The Levellers, frequent collaborators Simon Friend and Jeremy Cunningham, and Oysterband, Al Scott and Dil Davies.

It also marks a farewell (or as they put it, final encore) to the band (formed in 1986) as Burbridge moves on to other projects. As such, it features both new and revisited material, the latter represented by Erin Farwell, the traditional styled song of Irish emigration that first appeared on their 2013 best of Anticlockwise (which comes as part of the 2CD Limited Edition having only been previously available as digital).

It opens, however, with 'Firebird', a new co-write between Burbridge and Cunningham that, not surprisingly sounds a bit like The Levellers, a stirring, fiddle-driven number about rising phoenix-like above the past that actually contains a reference to earlier album Claws and Wings.

While much of the band's past work has concerned injustices inflicted upon the Irish, whether through sectarianism, bigotry or imperialism (and while clearly such things should not be forgotten, one has to question whether healing and reconciliation might not be better than raking the fires of rage and resentment), in contrast the bass-throbbing 'This Child' concerns the 1999 killing of Dorrie McKie, a 15-year-old victim of Moss Side gang warfare.

A call for solidarity in the face of oppression, 'The Last Mile' is likely to attract comparisons to The Pogues, though McDermott was making such music well before MacGowan was inviting folk to kiss his arse, that fusion of Gaelic folk, rock and folk also providing the bedrock energy to 'Forlorn Hope', the tale of the titular Portadown girl's journey from the convent to hard drinking and dealing in grass and grassing that forces her across the water to grow old disgracefully in Camden Town.

The darkness of the child abuse themed 'All That Fall' spills over into the rousing 'The Ballad of the Warrior Monk' which, set against the First Crusade and the siege of Edessa (which forms the basis of the cover illustration), unfolds a familiar trad-folk tale of brother unwittingly killing brother,

The way division tears us apart also anchors 'Crossed Lines', a slow march on which Molly Burbridge duets and a call for tolerance and reason that reminds that "when you deal with that demon you trade with your soul."

Musically more upbeat, the title track also addresses a state of siege, only in a more psychological sense with lyrics that tale of relationships foundered by self-fulfilling self-destructive thoughts and isolation, the melody line putting me in mind of Lindisfarne's 'Turn A Deaf Ear'.

As the title suggests, 'The Damned Man's Polka' takes a musically exuberant approach, punctuated by an Irish jig, the lines "Turn to the path of righteousness and all your frailties confess. Yield to me all you possess and I'll lead you through the wilderness"

seemingly speaking of faith and redemption, though the song (referencing both Cromwell and the Ayatollah Khomeini) actually sounds a warning of how religion leads not to the promised land but the "eternal killing field." It's a theme of deceit and betrayal and the cost they bring reinforced in the fiddle fiery and tumbling drums drive of the Christian iconography-peppered 'All In Your Name'.

It ends on a musically subdued, melancholic yet hopeful note, mournful fiddle, flute and drone backdropping Burbridge's starkly exposed vocal on 'The Ring', a song of natural cycles and permanence that ends with the valedictory lines "we vow, one to another/Here, now and always, we stand." It may well be the end of a chapter, but Burbridge's jorueny clearly has many more exciting and provocative miles to go.