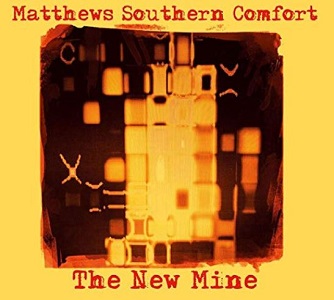 
Iain Matthews has been making music since the mid 1960's in various guises but is arguably best known for his involvement with Matthews Southern Comfort, the band that he continues to lead to the present day. Fans of Fairport Convention may of course dispute this!

The PR materials for the latest album describe this latest offering as "British folk rock meets classic Americana" and is probably a fairly good description for those unfamiliar with his and the band's work.

"The New Mine" opens with a fabulous version of Joni Mitchell's "Ethiopia." The arrangement is similar to the reworking of another Mitchell classic "Woodstock" which I heard the band perform a few years ago. The emphasis being on both the lyrics and the strong well balanced harmonies.

This new album changes the pace of the music constantly throughout. The third track "Feed It" is an upbeat joyful number with a delightful piano section in the middle. It is a song that is most perfectly suited to Iain's voice. "The Hole" questions what we are doing to our world and is a cry for the return of sanity. Despite the subject matter, this is a song that will make you think, possibly join in and cheer at the end at the sentiments expressed.

The band consists of Bart Jan Baartmans, Bart De Win, Eric De Vries and of course Iain. This new album was produced jointly by Bart and Iain, and they have come up with a real musical gem here.

Despite his many years in the business, Iain retains a freshness about his music and his at times, soulful little boy lost voice, is perfect for the deep meaning of some of the songs on offer here. A mix of superb lyrics and great musicianship combine to produce an album of real warmth and clarity.

The New Mine will be released in March of this year and a UK tour is planned for later in the year. Having seen the band before I can thoroughly recommend them especially if you enjoy your live music delivered with real passion and class.