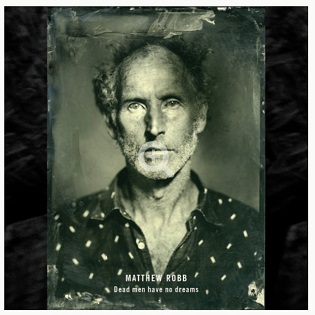 
Steeped in Americana, the hobo's thumb and the dust of the road, Matthew Robb is a UK singer songwriter, resident in Germany and drawing inspiration from the Folk Blues of the US prairies. Country, Folk, Blues run like veins through the weather worn rock that is DEAD MEN HAVE NO DREAMS. Ably assisted by Tobias Hoffmann's lyrical electric playing and the classic Sun Records stand up bass and drums of Cecil Drackett and Marcus Rieck, this is an album of atmosphere and soundscapes.

Robb attacks the title track "Dead Men Have No Dreams" with a series of sharp County song observations, like a upbeat Townes Van Zandt over a lithe shuffle beat and a killer electric guitar. Matthew Robb's languid spoken blues vocals manage to deliver some complex lines, like folk blues rap on "Common Destiny". Dark social commentary and real-life observations lie side by side in this dense song. "Beggin U Back" is a classic come back babe song, Robb's world weary voice gives the piece gravitas and weight. "Red Light Blues" has the insolent drawl of The Modern Lovers "Roadrunner", the don't care weary vocals are like The Velvet Underground chugging through Country Road songs. Killer electric guitar again from Tobias Hoffman. "Cry Some Tears" is a slower softer blues, Mathew's vocal is beautiful part Mary Gauthier, part Townes, the mix of electric lead and Robb's own acoustic is a, delight. "Spoils Of War" is a dystopian or post apocalyptic poem, a vivid fever dream. I don't which is more chilling, Robb's hypnotic voice or the otherworldly noises Hoffmann coaxes out of his guitar. "Pass That Buck" with its infectious rythmn and jangling acoustic is very Guthriesque or even Dylanesque with the tight word play and machine gun ddeliver. "When am I Gonna Wake Up" is an epic song of self depricating reflection. Matthew gets into a groove like a Dust bowl Van Morrison with a drier road weary run at Astral Weeks. The word plays and rhymes are Dylan like at times. Stop, listen and you can get lost in this expansive stream of poetry and this album of stories and atmospheres.