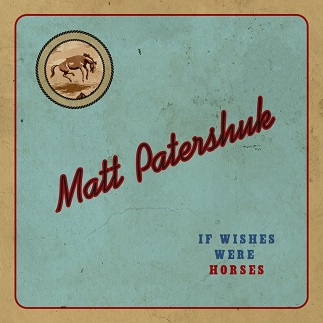 
For his latest release, the Canadian rootsy bluesman has again joined forces with producer Steve Dawson who brings pedal steel, baritone, 12-string and other guitars to the party on an album that also sees Charlie McCoy guesting on harmonica.

'The Blues Don't Bother Me' ("I've had them so many times before you see") he declares on the opening track, an easy rolling organ solo bluesy lope with an old school country undercurrent. Next up is lyrically right out of left field, the steady walking beat 'Ernest Tubb Had Fuzzy Slippers' recounting how, in 1957, the drunken country star walked into the lobby of the National Life Building in Nashville and fired a 357 magnum, intending to shoot music producer Jim Denny, who previously ran the Grand Ole Opry but was allegedly "skimming off the top", ending up firing at the wrong man but, fortunately, not hitting anyone.

'Horse 1 (For Bravery & Good Fortune)' is the first of four equine titled instrumentals, all variations on a single melody, punctuating the album and is followed by the sole non-original, a country blues stridealong, female harmonies cover of the Grateful Dead's 'Sugaree'. Pulsing cello and violin introduce the midtempo folksy 'Circus', another storysong, here pensive and reflective of days when there was "fire in our bellies" and "we were married in the lion's cage", then its down to the honky tonk for the melancholic romance of 'Alberta Waltz' as two lovers take to the floor with "aching hands and throbbing hearts" as the jukebox plays.

Having sung of one music legend, he turns to another, Chris Getsrin on organ and McCoy wailing the harp for the bluesy slouch of 'Velvet Bulldozer', written from the perspective and in the voice of Albert King back in 1950 as he goes about making his guitar sing. Then it's back to George Jones territory for the steel- streaked 'Let's Give This Bottle a Black Eye' while, later, Dawson on baritone, the reflective, strings-caressed 'Last Dance' calls to mind the balladeering best of Willie Nelson were he of Scottish Highlands descent and the midtempo chug of 'Walkin'' is pure 50s Patsy Cline heartbreak.

Opening on Jeremy Holmes' upright bass notes and carried on swampy organ frills and electric guitar riffs, the album closes back in growly blues stomp mood about living for today and going to hell on a 'Red Hot Poker', a rip-roaring end to one of the best things out of Canada this year.